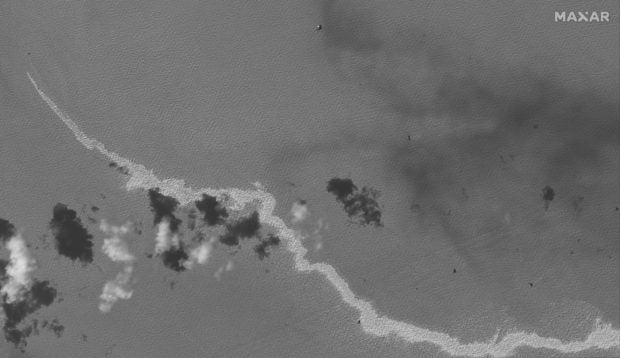 HOUSTON — The U.S. Coast Guard said on Monday it was investigating nearly 350 reports of oil spills in and along the U.S. Gulf of Mexico in the wake of Hurricane Ida.

The Coast Guard has been conducting flyovers off the coast of Louisiana looking for spills. It is providing information to federal, state and local authorities responsible for cleaning the sites.

Flights on Sunday found evidence of a new leak from an offshore well and reported another leak responsible for a miles-long streak of oil was no longer active. A third report of oil near a drilling platform could not be confirmed, it said.

FEATURED STORIES
NEWSINFO
Robredo on vote buying: That might be taxpayer’s money so accept it, but vote based on conscience
NEWSINFO
Bongbong says PH should modernize infrastructure to become Asia’s next logistics hub
NEWSINFO
Isko to critics after remarks vs Robredo: I’m sorry, this isn’t about Mr. Congeniality

Offshore oil producer Talos Energy Inc, which hired divers and a cleanup crew to respond to an oil spill in Bay Marchand, said old pipelines damaged during the storm were apparently responsible.

The source of the Bay Marchand leak remains unknown, said Coast Guard spokesman Lieutenant John Edwards. A Coast Guard-led team “will be looking at all potential sources in order to ensure any future risk is mitigated,” he said.

The spill off the coast of Port Fourchon, Louisiana, had decreased substantially since it was first discovered last week, Talos said. The company is not the owner of the pipelines and had ceased production operations in the area four years ago, said spokesman Brian Grove.

S2 did not immediately reply to a request for comment.

The Louisiana Department of Environmental Quality (LDEQ) said it is working with the Coast Guard and the U.S. Environmental Protection Agency to require companies responsible for any spills to halt and clean up the discharges.

The EPA also said it was working with LDEQ and the Coast Guard.

“EPA has received 39 reports relative to the Hurricane in our Area Of Responsibility and has been evaluating those reports and following up with responsible parties to ensure they are being addressed,” the agency said in a statement.

Read Next
Michael Yang, Pharmally officials face arrest after no-show in Senate probe
EDITORS' PICK
Work-From-Home is here to stay and requires reliable logistics
Pharmally scandal: When middlemen profit even during a pandemic
DOTr to defend proposal to increase passenger capacity in public transport
The crisis within: Suicides rise as COVID takes its toll on lives, livelihood
Legarda emphasizes role of ICC/IPs in nation building this IP month
USAID Opportunity 2.0 calls for applicants for grants for out-of-school youth engagement
MOST READ
Maine Mendoza names her worst critic
Robredo on vote buying: That might be taxpayer’s money so accept it, but vote based on conscience
Isko to critics after remarks vs Robredo: I’m sorry, this isn’t about Mr. Congeniality
AC Bonifacio’s dance cover of Lisa’s ‘Money’ leaves original choreographer ‘mind blown’
Don't miss out on the latest news and information.