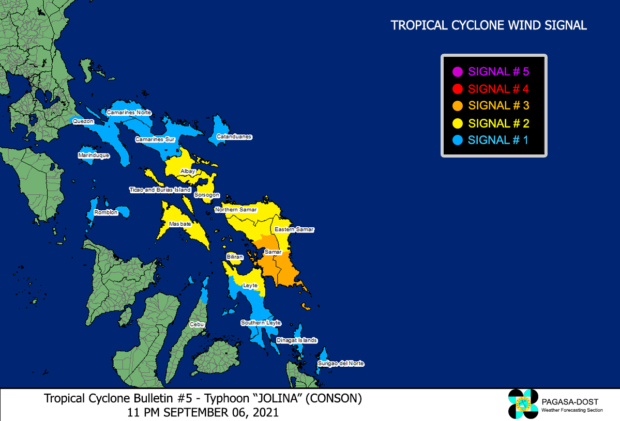 LEGAZPI CITY – The Albay provincial government ordered on Monday the suspension of work and classes due to the threat of Typhoon “Jolina” (International name: Conson).

In an advisory, Albay Governor Al Francis Bichara ordered the suspension of the online classes in all levels in public and private schools, work in both private and government offices and mall operations effective Tuesday (September 7) until lifted.

But those involved in the public safety, emergency response, medical services and disaster response shall continue with their operations.

Grocery stores would be allowed to open until 12 noon Tuesday.

Based Pagasa’s 11 p.m. severe weather bulletin, Jolina was last located in the vicinity of Llorente, Eastern Samar, with maximum sustained winds of 120 kilometers per hour near the center and gustiness of up to 165 kilometers per hour.

It continues to move west northwest at 20 kilometers per hour.

Pagasa said Tropical Cyclone Wind Signal No. 2 was hoisted over Albay, Sorsogon, and Masbate including Ticao and Burias Islands while Signal No. 1 in Camarines Norte, Camarines Sur, and Catanduanes.