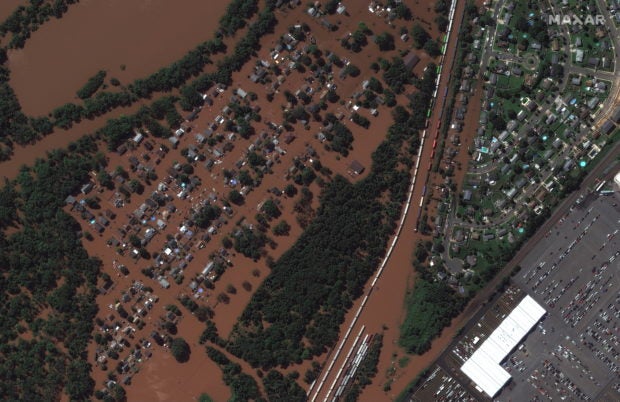 Storms capable of producing two to three inches (5-8 cm) of rain “in a pretty short period of time” were saturating New Orleans and other parts of Louisiana and Mississippi, and were expected to continue into the evening, said National Weather Service meteorologist Lara Pagano.

The states are struggling to recover after more than a week since Ida, one of the most powerful hurricanes ever to strike the U.S. Gulf Coast, tore a devastating path of destruction and crippled the New Orleans power grid.

The storm claimed at least 13 lives in Louisiana. More than 500,000 customers in the state remained without power on Monday, according to the PowerOutage.us website, which tracks power outages.

“Some of that (rain) will occur over soil that is saturated by Ida, areas that are already sensitive, with any additional heavy rain problematic and leading to flash flooding,” Pagano said.

The U.S. Coast Guard on Monday said it was probing nearly 350 reports of oil spills in and along the Gulf Coast in the wake of Ida.

President Joe Biden has approved disaster declarations for Louisiana, which he visited on Friday, as well as for New York and New Jersey, where he will travel on Tuesday.

The declarations qualify the states for federal assistance for repairs and rebuilding after the intense flooding   that also killed dozens in the U.S. Northeast.

Hochul said she had directed that $378 million in previously awarded hazard mitigation funding from the Federal Emergency Management Agency be devoted to supporting New York’s infrastructure against extreme weather.

Biden will travel to Manville, New Jersey, and the Queens borough of New York City on Tuesday to assess damage from Ida.

New York had 17 confirmed deaths from Ida, four in suburban Westchester County and the rest in New York City. In New Jersey, there were at least 27 confirmed storm deaths and four people missing, a governor’s spokesperson said.

Another large storm, Hurricane Larry, churned on Monday about 715 miles (1,150 km) off the Northern Leeward Islands.

Predicted to remain out to sea in the Atlantic Ocean, Larry was expected to cause “significant swells” along the U.S. East Coast from midweek until the weekend, Pagano said.

“These swells will likely cause life-threatening surf and rip-conditions so beach-goers are urged to follow the guidance of lifeguards and local officials,” Pagano said.