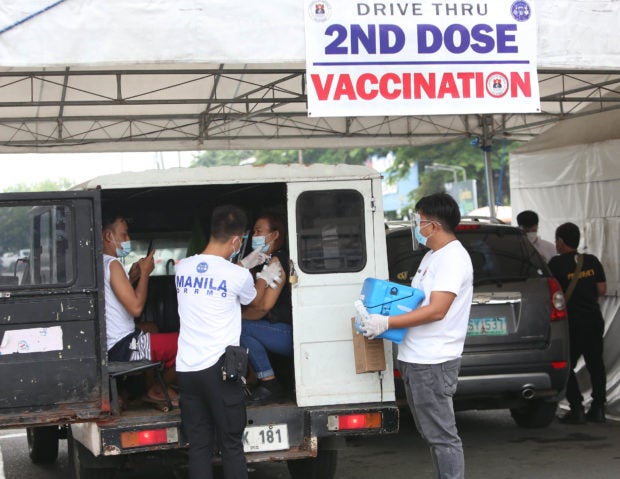 VIRUS PROTECTION People receive their COVID-19 vaccines inside their vehicles at a drive-thru vaccination center in Manila as the Department of Health places the National Capital Region under alert level 4 due to the increase in infections and hospital confinement. —MARIANNE BERMUDEZ

MANILA, Philippines — Three out of every four Filipinos getting infected with COVID-19 are now caused by the Delta variant and cases of this highly transmissible virus that is fueling surges worldwide are in all of the 17 regions across the country, the Department of Health (DOH) said on Monday.

The DOH also reported a record 22,415 COVID-19 cases, the fourth consecutive day of more than 20,000 new infections confirmed daily, adding that it expected the number to continue rising in the coming weeks because of the Delta variant.

Out of 367 COVID-19 samples analyzed last Sept. 3, the Philippine Genome Center found 276 or 76 percent positive with the Delta variant. The genome sequence showed 29 or 7.9 percent with the Alpha variant and 28 or 7.6 percent with the Beta variant. These two strains were also more transmissible than the original version of the coronavirus.

The DOH said the latest detected Delta cases were based on samples from 15 regions and the majority or at least 245 of them had no travel history. Eight of the 276 Delta cases had also died, at least two cases still active while the rest had recovered.

The positivity rate was a record 28.8 percent of 73,264 people tested last Sept. 4 and the results did not include those from eight laboratories that had yet to submit their reports.

“Cases may still continue to increase in the next weeks due to the higher transmissibility of the Delta variant and as we continue active case finding,” Health Undersecretary Maria Rosario Vergeire said during a media briefing on Monday.

While some regions showed a slowing down in the increase in cases, the country’s case classification and health systems capacity remained at high risk, she said.

Ninety-five percent of all provinces and cities were under the highest alert level 4 or alert level 3 and more than half of the country’s 17 regions have their health systems at high risk with at least 70-percent capacity usage.

“With the sustained increase in the detection of Delta variant cases, the DOH strongly reiterates to the public the strict adherence to the minimum public health standards as a crucial support to vaccination efforts to prevent the further transmission of COVID-19 and its variants,” the DOH said in a statement.

Detected Delta variant cases have been increasing since the first case was recorded in July. The genome sequencing done on Aug. 27 found the Delta variant in seven out of 10 COVID-19 samples.

Vergeire said the confirmed COVID-19 cases showed a steep increase last month, with a new peak in new cases weekly since the second week of August.

The average daily reported cases stood at 18,292, which was 11 percent higher than the 16,513 average daily cases recorded in the previous week.

The DOH said all areas in the country were showing an increase in the number of cases, with Metro Manila and areas in Luzon showing a steep spike.

Metro Manila and 11 other regions were classified as high risk due to their elevated average daily attack rate (Adar) ranging from 33.6 infected persons for every 100,000 population in Metro Manila to 8.85 Adar in Soccsksargen (South Cotabato, Cotabato, Sultan Kudarat, Sarangani, General Santos).

All 16 cities in Metro Manila have their health systems capacity at high risk.

The DOH also noted that daily reported deaths due to COVID-19 have been increasing since the last week of July.

The grim numbers are expected to still increase, according to Vergeire. The eight regions with the highest number of deaths are Central Luzon, Metro Manila, Calabarzon, Central Visayas, Caraga, Soccsksargen, Ilocos and Northern Mindanao.