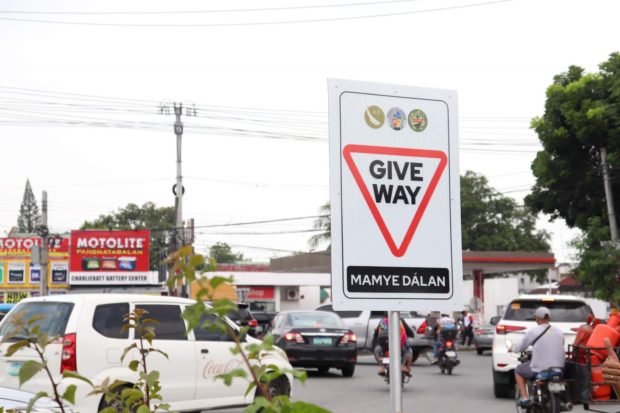 LOCAL LANGUAGE Traffic signs put up by the city government in Angeles City since Sept. 1 are in Kapampangan to help popularize the local language. —ANGELES CITY PUBLIC INFORMATION OFFICE PHOTO

ANGELES CITY, Pampanga, Philippines — Judging by the looks on their faces, drivers in this city in Pampanga province have been either amused or surprised at seeing traffic signs in Kapampangan along its three major roads.

The signboards, mainly in English with Kapampangan translations, were installed on Sept. 1 as part of efforts to save a “highly threatened” language, according to Francis Pangilinan, chief of the Angeles City Traffic Development Office.

“A tricycle driver appreciated the signboards. He approached me to thank the city government,” Pangilinan told the Inquirer in an interview on Friday.His office is installing more than 400 signboards using 21 Kapampangan translations, like “Bawal Paparada Keni” (No Parking), “Lugal A Mayabit Ya Ing Saken” (Tow Away Zone), “Mamye Dalan” (Give Way).

Other motorists who appeared delighted by the signboards would be heard exclaiming, “Aru abe, kasangting da (Oh my friend, these are great)!”

Compliant with lawsSome were erected beside or near English signs prescribed by the Land Transportation Office. The agency has not opposed or questioned the translations.

The ordinance described Kapampangan as “highly threatened” although it is the seventh largest major language spoken in the country.

Apart from Pampanga, Kapampangan is spoken in other Central Luzon provinces, such as in some towns of Bataan, Tarlac, Bulacan and Nueva Ecija. It is used by more than 2 million native speakers.

Lazatin said Kapampangan should be preserved and promoted by writing and conversing, even in social media.

The city council has been holding its sessions in the local language at least once a month since January, according to Vice Mayor Vicenta Vega-Cabigting, the council presiding officer.

The council has drafted four resolutions in Kapampangan since February.

Department of Education Order No. 74 Series of 2009 (Mother Tongue-based Multilingual Education) and section 5-F of Republic Act No. 10533 (K-12 Law) also encourage the use of Kapampangan in official school gatherings, meetings, programs and celebrations.