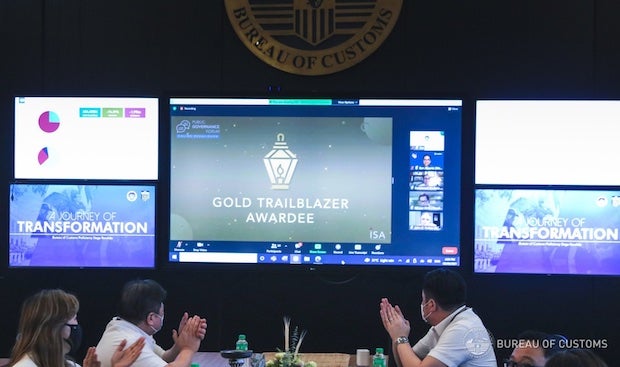 Custos employees witness and support their bureau’s bid to pass the Proficiemcy Stage of the PGS. (Photo from the Bureau of Customs)

MANILA, Philippines — The Bureau of Customs (BOC) has received for the third time the Gold Governance Trailblazer award from the Institute of Solidarity in Asia (ISA), a governance reform group formed in 2001 by economist Jesus Estanislao, a former secretary of the Department of Finance.

The BOC received the award on Friday during the Public Governance Forum — BOC Proficiency Revalida, which was conducted via a Zoom conference.

The ISA granted the award after the BOC passed the third stage — the Proficiency  Stage — of its Performance Governance System (PGS).

Customs chief Rey Leonardo B. Guerrero enrolled the bureau in the four-stage PGS in 2019 — the year it got its first Gold Governance Trailblazer award in the PGS Initiation Stage. In 2020, it again got the award in the second part called the Compliance Stage.

In last Friday’s forum, Guerrero presented the innovative programs of his bureau, which summed them up in a statement.

These include the following:

For its employees, the bureau has put in place the Values Transformation Program, digitized Individual Performance Commitment and Review, and Personal Scorecard.

These innovations are in line with the BOC Strategic Communications Plan of automation and modernization, good governance, and values transformation.

The BOC was commended by the Revalida panelists for the overall Revalida performance.

Among those in the panel were the following:

“The PGS is a significant tool of good governance reform promoting the efficient delivery of services and the establishment of a positive climate for market institutions. It also calls for effective, sustained, and systematic contributions from individuals and institutions for the common good of their institution or community and of the Philippines as well as the long term development of the Filipino,” the BOC statement said.

The award for the fourth stage of the PGS – Institutionalization Status — is granted after an audit review of the bureau’s performance for at least two years of implementing its PGS strategy.

Commenting on the BOC’s third award, Guerrero said: “This is a testament to the hard work and dedication of the good men and women of BOC. This proves that we are committed and faithful in this transformation journey. This award not only gives us inspiration but is also a reminder that distinguished people in society believe in us and that we must not fail them. I would like to assure ISA and all our stakeholders, that everything that we started will be sustained, faithful to our mandate of providing the best service to our people.”