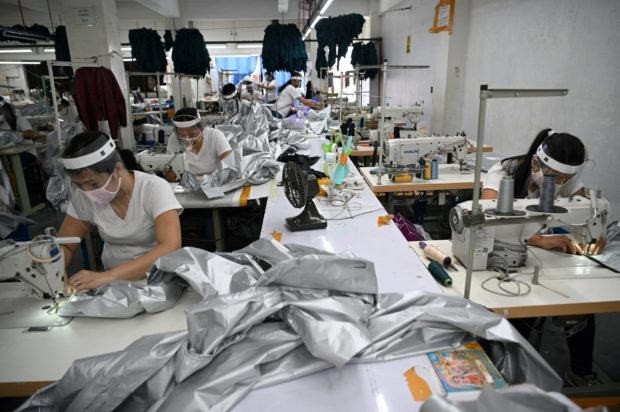 A group of women workers rush in making Personal Protective Equipment (PPE) for distribution to frontline workers in different hospitals in the country at a factory in Taytay town, Rizal province, east of Manila on April 24, 2020. (Photo by Ted ALJIBE / AFP)

MANILA, Philippines — The Commission on Audit (COA) has said it did not observe any purchase of supposedly overpriced personal protective equipment (PPE) during the Aquino administration.

“As far as I know parang wala naman observation na ganoon (there were no observations like that),” COA Chairperson Michael Aguinaldo said in response to the interpellation of Iloilo Rep. Janette Garin during a House hearing.

Garin was asking Aguinaldo if the COA had flagged overpriced PPE procurement five to six years ago.

Roque, however, clarified he was not saying that the PPEs procured during the previous administration were overpriced. He said he was only pointing out that they were costlier than the ones bought during the COVID-19 pandemic.

The Department of Health earlier said it will look into the procurement of the supposedly costlier PPEs during Aquino’s term.