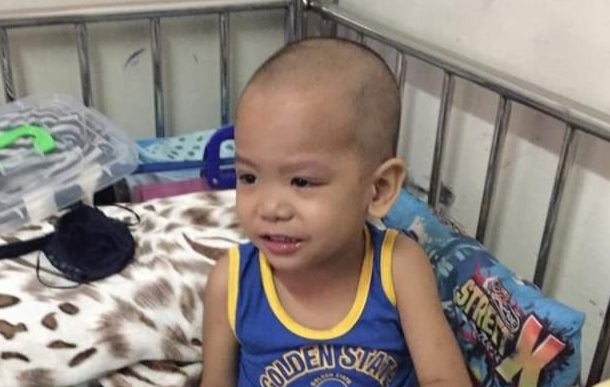 Life has not been kind to 4-year-old Jan Richard Orig who was diagnosed two years ago with acute lymphoblastic leukemia.

“He had an on-and-off fever but the doctor did not find anything unusual in his laboratory test results. Then in November 2019, he fell while he was playing and hurt his knee. After that, I would always find him lying down. He said it was hard to walk,” his mother, Jovelyn, told the Inquirer.

The next month, Orig’s condition worsened and his worried mother brought him back to the doctor.

“His stomach was bloated and hard. He developed rashes and his lymph nodes were swollen. He was also very pale and there were reddish spots in his eyes,” Jovelyn said.

The doctor ran more tests and consulted a hematologist who referred the boy to Philippine Children’s Medical Center in Quezon City.

Mother and son went to the hospital on Jan. 31, 2020, and Orig was admitted at 1 a.m. the following day. He would be there for the next two weeks.

“He underwent a bone marrow test and was given a blood transfusion. Once it was confirmed he had leukemia, he started undergoing chemotherapy almost every day,” Jovelyn said.

After treatment, she noticed a big improvement in her son’s condition. He started walking again and putting on weight.

But in April this year, the doctor had some bad news: The cancer was back.

Orig was immediately placed on high-dose chemotherapy but, just last month, he suffered another relapse.

“The doctor told me my son’s condition was delicate. For now, he would undergo oral chemotherapy and continue with the blood transfusions,” Jovelyn said.

The frequency of the chemotherapy sessions would depend on Orig’s response to the treatment, she added. His last session cost around P179,000.

Jovelyn is praying for a miracle for her son who scolds her whenever he sees her crying over his condition.

“He tells me he doesn’t want to see me crying because he himself doesn’t cry whenever the nurses prick him with needles,” she said.

Mother and son are staying with relatives in Quezon City while the rest of the family are in Pagbilao, Quezon province, where Jovelyn’s husband is an on-call skilled worker.

Any donation for Orig’s medical treatment can be deposited in Jovelyn M. Orig’s BDO account (012470025237). She can be contacted at