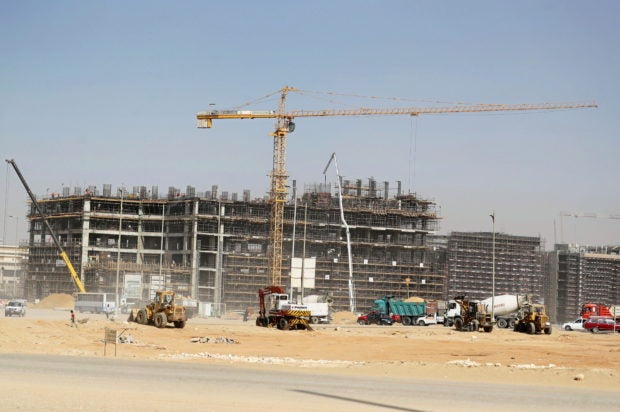 CAIRO — In Egypt’s new capital on the outskirts of Cairo, residents will use smart cards and apps to unlock doors and make payments, and surf the web on public WiFi beamed from lampposts.

A network of at least 6,000 cameras will monitor activity on every street, tracking pedestrians and vehicles to regulate traffic and report suspicious activity.

Its “smart city” design is a world away from parts of the existing sprawling capital, where creaking infrastructure can mean patchy internet and phone coverage, doormen at densely built apartment blocks form a human network of look-outs, and administrative errands can involve hours of queuing.

The city being built from scratch in the desert – so far called the New Administrative Capital – is designed to hold 6.5 million residents and is expected to open to its first civil servants later this year.

How much Egypt’s centre of gravity shifts from Cairo to the new capital, 45 km from the Nile, is unclear. For many ordinary Egyptians, for whom the bustling city has been home for generations, the move and cost would be unthinkable.

But for those who do make the switch, they are promised a single app for paying utility bills, accessing local services, and reporting complaints and problems.

Officials say advanced technology systems will help reduce waste by detecting leaks or faults, and by allowing residents to keep an eye on consumption.

“Through their mobile app a citizen will be able to manage all their life affairs from their mobile phone,” said Mohamed Khalil, head of technology for the Administrative Capital for Urban Development (ACUD), the military and government-owned company building the city.

Authorities plan to repeat and synchronize the technology through other developments championed under President Abdel Fattah al-Sisi, for whom the new city is a flagship project.

“This model is being applied in all the 14 new cities that are being established … one of our goals is the integration of cities,” said Khalil.

Some Egyptians see the new capital being for a privileged elite in a country where nearly a third of the population live below the poverty line. Others see the technological boost as long overdue.

“It’s all very useful for the citizen,” said Tark Habib, a 53-year-old trader speaking in central Cairo, where the Mugamma, the monolithic and notoriously chaotic headquarters of Egyptian bureaucracy in recent decades, is being emptied.

Technology and communications contracts for the new capital total $640 million, which could rise to $900 million in later phases, Khalil said. Partners include Huawei, Orange and Mastercard.

As building work continues, the level of scrutiny – or any concerns over it – has yet to be tested.

Officials say surveillance technology would be aimed at detecting crime and enhancing safety, and that data will be protected by Egyptian law and international standards.

Nonetheless, Egypt has witnessed a sweeping crackdown on dissent under Sisi, enforced by measures including controls on internet activity, spot security checks in the street, an effective ban on protests and a rolling state of emergency.

While enhanced surveillance could make identification of dissidents easier, “I don’t see what it would really add beyond what they already are doing, which is very extensive,” said Steven Feldstein, a senior fellow at the Carnegie Endowment for International Peace in Washington and author of a book on digital repression.