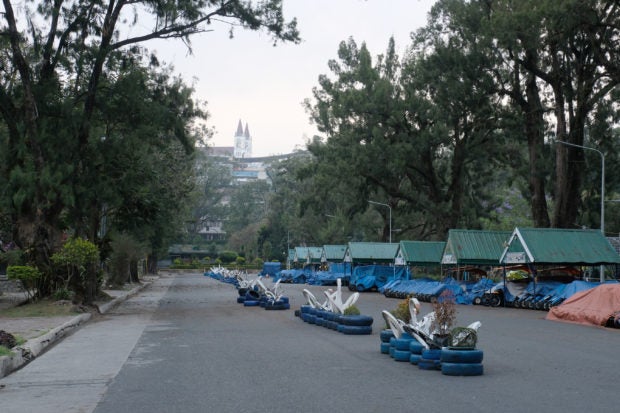 SILENCE IN THE PARK The biking area at Burnham Park in Baguio City is silent as the entry of tourists has been regulated to contain the spread of COVID-19. The city’s tourism industry is hopeful that a ramped-up vaccination among workers and residents will lead to a gradual economic rebound for the summer capital. —NEIL CLARK ONGCHANGCO

BAGUIO CITY, Benguet, Philippines — The Department of Tourism (DOT) has targeted to inoculate all of the more than 31,000 tourism workers in the city within three days to improve tourist confidence and ensure the reopening of the local economy amid the pandemic.

Speaking during the 112th Baguio Day celebration on Wednesday, Tourism Secretary Bernadette Romulo Puyat said the agency was hoping to sustain the gradual opening of tourism in the country that started in this city “so everyone can get back to work.”

“Today, we are here to vaccinate a hundred percent of your tourism workers to make sure the reopening of the Baguio economy is smoother,” Puyat said during the occasion at the Baguio Convention Center attended by local officials.

According to Puyat, Baguio was the first local government to reopen its tourism industry last year despite quarantine restrictions due to the pandemic.

She was referring to the announcement made by Mayor Benjamin Magalong during last year’s Baguio Day celebration to accept again a limited number of visitors under an experimental travel bubble or travel corridor with the Ilocos region.

The “Reef to Ridge” program allowed travelers from the provinces of La Union, Pangasinan, Ilocos Sur and Ilocos Norte to drive up to the city with their trips being regulated by a shared travel and health monitoring system. Baguio residents were also allowed to travel to the Ilocos. 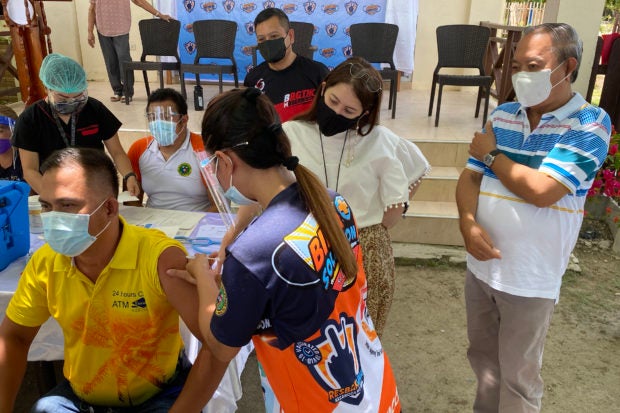 The corridor was implemented in October last year and Baguio eventually allowed residents from Central Luzon and Metro Manila to visit.

But only a little over 123,000 guests entered the city’s borders from October last year to Aug. 22 this year, records from the local tourism office showed.

“The vaccination of our tourism workers is very important. We are not just looking at the safety of our tourists, but also those working in the tourism sector,” Puyat said.

She said inoculating those in the tourism industry and other priority sectors would help achieve “uninterrupted work routines.”

During the occasion, the city also launched its new marketing brand, “Breathe Baguio.”

Plans to modernize the city, which was designed and built by the American colonial government as its summer home, were also presented at the program. A prototype of Baguio’s modern sidewalks was unveiled on Session Road later in the day.

“Since the onset of the pandemic, Baguio had always been a provider of hope and inspiration [for the country] with its effective implementation of health and safety protocols, as well as rigid visitor and resident management that allowed for opening to tourists ahead of other destinations,” Puyat said.

The DOT on Monday started a three-day vaccination program for tourism workers, among them department store workers, hotel and shopping mall employees, and food servers.

As of Tuesday, at least 95,023 residents had been fully inoculated, including 70,151 essential workers, while 141,811 residents had received the first dose of the vaccine.

The city also recorded 150 new infections on Tuesday, raising its number of active cases to 870.

Genome sequencing results also confirmed on Tuesday a seventh Delta patient in the city, who had been classified as recovered.

Magalong, who joined the program via video conference, said P120 million had been reserved for the purchase of vaccines.

“We are aiming for 95-percent herd immunity, nothing less,” he said.