WHO, CHR not sold on ‘vaccine bubble’ idea 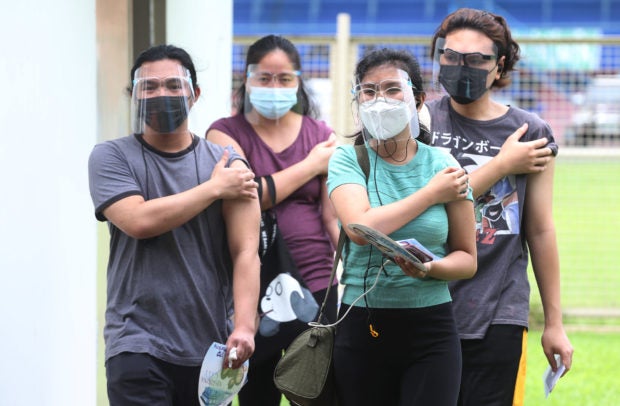 FREER MOVEMENT FOR VACCINEES Residents avail themselves of COVID-19 vaccines in Marikina City on Tuesday. Some government and business leaders have called for the setup of so-called vaccine bubbles to stimulate the economy and allow fully inoculated employees to return to work. —NIÑO JESUS ORBETA

The World Health Organization (WHO) does not support the idea of establishing so-called vaccine bubbles, or areas allowing more movement for fully vaccinated people, saying “breakthrough infections” are still being recorded among them.

And for the Commission on Human Rights (CHR), restricting the movement of unvaccinated persons while giving leeway to the inoculated may lead to discrimination.

Private companies and industry groups have recently called for the setup of safety bubbles in select areas of the National Capital Region and other parts of the country.

But in an online briefing on Tuesday, Dr. Rabindra Abeyasinghe, the WHO representative to the Philippines, said: “The concept of bubbles for vaccinated people doesn’t actually hold true because you will continue to be at risk of getting infected. And if you are infected, you could infect other people.”

He said there had been “breakthrough infections across all vaccine brands” since the spread of the Delta variant of the novel coronavirus.

The variant has reduced vaccine efficacy across all brands, Abeyasinghe said.

“I already confirm that the Delta variant is now the dominant variant in the Philippines [based on] existing data that we are seeing,” he said. “Are we in a community transmission? Certainly.”

The Department of Health (DOH) also confirmed that there are now more Delta variant cases than Alpha and Beta cases in the country, based on data from the University of the Philippines-Philippine Genome Center.

Health Undersecretary Maria Rosario Vergeire noted the rise in the sequenced cases from 6 percent in June to 56 percent in August.

“This coincides with the start of a steeper rise in the number of cases in July, similar to what we saw previously at the start of our April peak in cases with the spread of the Alpha and Beta variants,” Vergeire said.

The rise in Delta cases could peak “by mid-September,” she said. But this will “greatly depend” on an improved pandemic response, including faster vaccine deployment and increased public compliance with health standards.

Abeyasinghe called for a more intensified vaccination rollout, saying “the narrative that vaccines are effective in preventing severe disease and death is still largely correct.”

“There was never a promise that the vaccine will keep you 100-percent protected from getting infected. The promise was [that] the vaccine can prevent severe infection and death,” he stressed.

‘Respect for the rights of all’

CHR spokesperson Jacqueline de Guia said allowing increased mobility only for vaccinees, while meant to spur economic activity, does not address the realities on the ground, such as the continuing inadequacy of vaccine supplies and the growing number of the unemployed.

“In search for a more sustainable solution, we remind the government to always consider respect for the rights of all and ensure that no one is left behind,” De Guia said.

She cited figures from the Metropolitan Manila Development Authority showing that only 43.5 percent, or 4.26 million residents, have been fully vaccinated in the capital region.“This exposes a significant percentage of residents who will be restricted, should the proposal push through,” she said.

She said any restriction on mobility should be based on scientific evidence, not arbitrary or discriminatory.

“The relatively low number of cases today is due to lower laboratory output last Sunday. Lower number of samples from disease reporting units [among the local governments is] also … observed during Sundays,” the department said.

However, 118 have succumbed to the disease, pushing the total fatality count to 33,448.

The country’s positivity rate declined slightly to 25.4 percent, after a record high of 27.9 percent on Sunday’s case bulletin, based on Friday’s tests.Tuesday’s bulletin showed that of 49,187 tested on Sunday, about one in four or 12,493 turned out positive for COVID-19.

Eight labs were unable to submit their data on time, and there were 172 duplicates from the total case count. Another 37 cases that were previously tagged as recoveries were reclassified as deaths, after final validation.

—WITH A REPORT FROM JHESSET O. ENANO