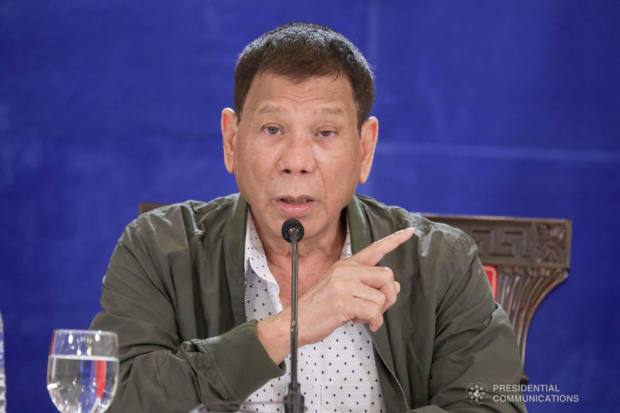 MANILA, Philippines — Beyond all the dramatic statements meant to keep everyone guessing, President Rodrigo Duterte still wants his daughter, Davao City Mayor Sara Duterte, to succeed him and is cleverly setting her up to be a formidable contender in the 2022 presidential race.

This was the analysis of New York-based Global Source Partners, which had been following “the seeming love-hate relationship between father and daughter.”

For Global Source, a macroeconomic and geopolitical think tank focusing on more than 20 emerging markets across the globe, Duterte’s recent tough talk on the country’s claims in the West Philippine Sea and his 180-degree turn reinstating the Visiting Forces Agreement with the United States might be a way of eliminating “hot-button” issues that political rivals could use against his daughter.

“Our main takeaway from all this is that in the President’s calculations, his daughter stands the best chance in a multicontested fight, with Sen. (Manny) Pacquiao out of the picture,” according to the Aug. 28 research note written by Romeo Bernardo and Marie Christine Tang, the groups’ country analysts for the Philippines.

Otherwise, the think tank said, Pacquiao — who also hails from Mindanao — could take away a big chunk of votes from Sara.

While the period for filing of certificates of candidacy is still a month away, at least a dozen names have made it to a private pollster’s list of “presidentiables,” with Sara Duterte currently on top, the group noted.

And with the polls still eight months away, “we expect pruning [the list] to three or four electable presidential candidates closer to the elections,” the research said.

On Aug. 24, the president announced that he would run for vice president in 2022. While he did not say who his presidential candidate would be, the ruling party PDP-Laban earlier nominated his former aide and now Sen. Christopher Lawrence “Bong” Go to be its standard-bearer.

The next day, Sara Duterte issued what Global Source described as a very well-crafted statement confirming the Go-Duterte tandem, but pointing out that she was also given the option to “take in” Go as her vice president. She also reproached both her father and Go and distanced herself from PDP-Laban (Partido Demokratiko Pilipino-Lakas ng Bayan), which she described to be in “complete disarray.”

“The cleverness lies in advertently or inadvertently showing off [Sara] as the father’s daughter but not his puppet, something that was reportedly on display in Davao when the strong-willed daughter and the father were mayor and vice mayor, respectively,’’ Global Source said.

Also a smart move was securing the party’s presidential nomination for a less popular ally, Go — which the think tank said could just be a “Plan B” — rather than going for PDP-Laban’s erstwhile head, the more popular Pacquiao, the group said.

The guessing game, it said, “makes it difficult for the opposition to organize and for potential financiers to pick winnable candidates to support, locking in the administration’s overwhelming organizational and funding advantage.”

In his recorded public address aired on Tuesday, Duterte reiterated that he would run for vice president, this time saying he would do it because there was no opposition.

According to Duterte, political allies, such as Sen. Imee Marcos, who recently joined opposition senators in criticizing the government’s multibillion-peso contracts related to the pandemic response, are now playing “games” to raise their chances of being picked as administration candidates.

“[Marcos’] game is like this: She has been going to Mayor Sara, hoping that if [my daughter] decides to run for president, she (Marcos) will be the vice presidential candidate,” Duterte recounted.

However, the president maintained that since her daughter would not be running for president, Marcos’ plan would not materialize.

Bayan Muna Rep. Ferdinand Gaite called the possible Sara Duterte-Imee Marcos tandem a “partnership forged in hell” which, if given the reins of power, would hand over the country to a “government of cronyists and plunderers.”

—WITH REPORTS FROM JEROME ANING AND JULIE M. AURELIO