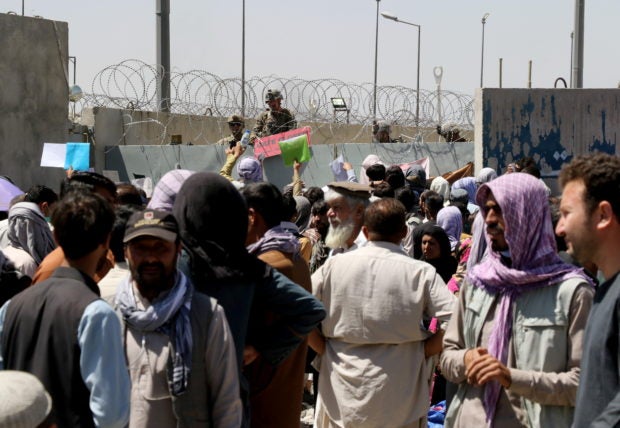 Crowds of people show their documents to U.S. troops outside the airport in Kabul, Afghanistan August 26, 2021. REUTERS/Stringer

MANILA, Philippines — The Philippines would only accept refugees from Afghanistan under a government-to-government arrangement, according to Foreign Secretary Teodoro Locsin Jr.

At the House hearing on the 2022 budget of the Department of Foreign Affairs on Tuesday, Locsin said the Philippines was ready to accept refugees and asylum seekers but the government would not deal with the private sector.

“For asylum seekers and refugees, the Philippines will continue to extend assistance in line with its long tradition of timely and responsive humanitarian action. I cannot say more, the situation is fluid to put it mildly,” he told lawmakers, referring to the crisis in Afghanistan.

“But let me add this warning, we will not engage in any asylum or giving any asylum, unless it is on a government-to-government basis,” he added.

As of Aug. 30, Locsin said only 24 Filipinos remained in Kabul, with eight seeking repatriation and 16 opting to remain there. A total of 187 Filipinos have been evacuated, he added.

Malacañang earlier said the Philippines was willing to accept refugees from Afghanistan after the Taliban seized power.

“Asylum seekers are welcome in the Philippines,” presidential spokesperson Harry Roque had said.

Read Next
Questions hang in NGO worker’s abduction, death
EDITORS' PICK
SMDC’s Bloom Residences: A master planned community that cares for your health and wellness
COVID-19 cases in PH pass 3.2 million mark with 37,154 new cases — DOH
Over 3 Million worth of prizes to be won at Smart Padala’s SENDali Manalo Promo!
Upsilon, Unilever give ‘real talk’ on climate change crisis
What to expect as Metro Manila starts ‘no vaccination, no ride’ policy on Monday
Metro Manila’s daily COVID-19 growth rate drops to 2% — Octa Research
MOST READ
Thailand records first Omicron death
‘Not my loss’: Did Kris Aquino just comment on her breakup with Mel Sarmiento?
Prince Harry sues for UK police protection
Ivana Alawi tests positive for COVID-19, urges public to comply with health protocols: ‘No one’s above the law’
Don't miss out on the latest news and information.