Gordon: Duterte's insults do not affect me; unleashes own jibe vs President | Inquirer News

Gordon: Duterte’s insults do not affect me; unleashes own jibe vs President 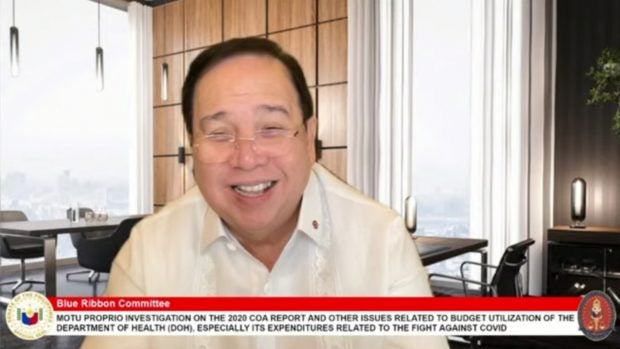 Sen. Richard Gordon, chairman of the Blue Ribbon Committee, presides over the continuation of the motu proprio investigation on the 2020 Commission on Audit (COA) report and other related issues related to the utilization of the Department of Health (DOH) budget, especially its expenditures on the fight against COVID-19, Wednesday, August 25, 2021. (Screen grab/ Senate PRIB)

MANILA, Philippines — Senator Richard Gordon remains unfazed by insults thrown against him by President Rodrigo Duterte, as he stood by his Senate committee’s probe into the “overpriced” medical items purchased at the height of the pandemic.

He also said he forgives Duterte for his insults against.

“You know why I forgive you? Because you go into personal attacks. That’s fine with me. Alam ko mahina ang tao na nagaatake [nang] personal,” he added.

In a taped address aired Tuesday, Duterte once again criticized senators and took particular focus on Gordon, whom he described as a “talkathon” champion.

Duterte further picked on Gordon’s attributes and took potshots at the senator’s weight, with an advice for him to lose some.

The President’s criticisms came after Gordon led a seven-hour Senate hearing into the flagged “deficiencies” in handling of pandemic funds last Friday.