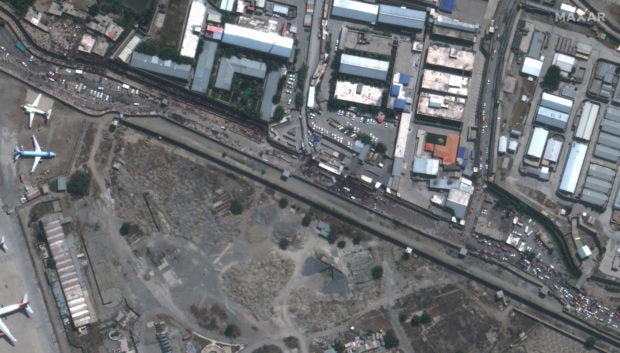 FILE PHOTO: An overview of the Abbey Gate at Hamid Karzai International Airport, in Kabul, Afghanistan August 23, 2021, in this satellite image obtained by Reuters on August 26, 2021. Satellite image 2021 Maxar Technologies/Handout via REUTERS.

WASHINGTON — Kabul airport is without air traffic control services now that the U.S. military has withdrawn from Afghanistan, and U.S. civil aircraft are barred from operating over the country unless given prior authorization, the U.S. Federal Aviation Administration (FAA) said on Monday.

The FAA said in a statement that “due to both the lack of air traffic services and a functional civil aviation authority in Afghanistan, as well as ongoing security concerns, U.S. civil operators, pilots, and U.S.-registered civil aircraft are prohibited from operating at any altitude over much of Afghanistan.”

Earlier this month, the U.S. military said it had assumed air traffic control responsibilities in Kabul to facilitate the evacuation of tens of thousands of people from Afghanistan.

The FAA said U.S. civil operators “may continue to use one high-altitude jet route near the far eastern border for overflights. Any U.S. civil aircraft operator that wants to fly into/out of or over Afghanistan must receive prior authorization from the FAA.”

On Aug. 18, the FAA said U.S. air carriers and civilian pilots could fly into Kabul to conduct evacuation or relief flights with prior U.S. Defense Department approval. U.S. airlines helped transport thousands of evacuees this month but conducted flights from airports outside Afghanistan.