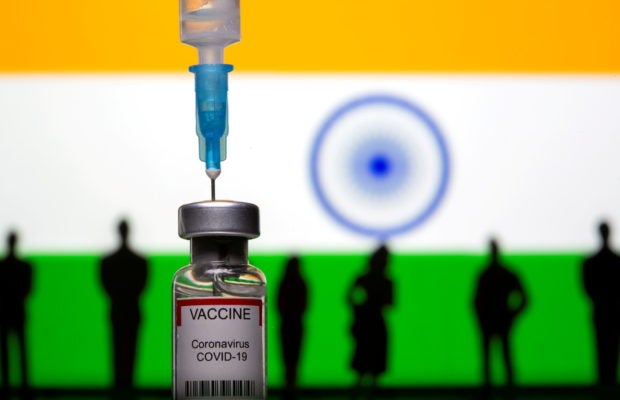 3D-printed toy figurines, a syringe and a vial labelled “coronavirus disease (COVID-19) vaccine” are seen in front of India flag in this illustration taken May 4, 2021. REUTERS FILE PHOTO

NEW DELHI — India’s rising output of COVID-19 vaccines and the inoculation of more than half its adult population with at least one dose are raising hopes the country will return as an exporter within months, ramping up from early next year.

After donating or selling 66 million doses to nearly 100 countries, India barred exports in the middle of April to focus on domestic immunization as infections exploded, upsetting the inoculation plans of many African  and South Asian countries.

India’s daily vaccinations surpassed 10 million doses on Friday, with national vaccine production more than doubling since April and set to rise again in the coming weeks. New production lines have been set up, a vaccine developed by Cadila Healthcare won recent approval, and commercial production of Russia’s Sputnik V is starting in India.

The Serum Institute of India (SII), the world’s biggest vaccine maker, is now producing about 150 million doses a month of its version of the AstraZeneca shot, more than twice its April output of about 65 million, a source with knowledge of the matter said.

“No fixed timeline on exports but the company hopes to restart in a few months,” said the source, who declined to be named without approval to talk on the matter.

SII, which has previously indicated exports could resume by year-end, did not respond to a request for comment.

“With successful national vaccination and the arrival of more products, we are hoping that Indian supply to COVAX will resume as quickly as possible,” a spokesperson for the platform’s co-lead GAVI told Reuters in an email.

India, a major international producer of many other vaccines, could play a “similarly transformative role in the global response to COVID-19,” the spokesperson said.

India’s health ministry and the foreign ministry, which coordinates vaccine exports, did not respond to a request for comment.

Bharat Biotech, the maker of India’s first domestically developed COVID-19 shot, on Sunday inaugurated a new factory with a production capacity of 10 million doses a month. It said it was “marching towards” a goal of a total annual capacity of about 1 billion doses of the drug, Covaxin.

Infections, meanwhile, are again rising in India after an explosive outbreak in April and May. But the country has administered more than 633 million vaccine doses, with at least one dose to 52% of its 944 million adults and two doses to more than 15%.

A government source told Reuters in June the U.S. experience showed that vaccinations tend to slow down after a big majority of people get their shots. That might give SII a chance to export excess output, said the source.

The chief of Prime Minister Narendra Modi’s party said this month India could produce as many as 1.1 billion vaccine doses between September and December, enough to fully immunize all adults in the country this year.

India has so far given emergency authorization to six COVID-19 shots, four of which are being produced locally. One more domestic vaccine is expected to be approved soon while many more are going through mid-stage trials.

Read Next
20-story Pedro Gil Residences to rise in Manila City
EDITORS' PICK
Acer starts the year off strong with the Aspire Vero National Geographic Edition
Over 3 Million worth of prizes to be won at Smart Padala’s SENDali Manalo Promo!
COVID-19 cases in City of Manila are decreasing, says OCTA
DOH: Too early to say COVID-19 cases are declining
The best of bayside and city living at SMDC’s Sail Residences
Gov’t rolls out COVID-19 vaccination in select pharmacies on Jan. 20 to 21
MOST READ
Comelec junks petition to scrap Bongbong Marcos COC
Marcos Jr. visits Cebu, stands as ‘ninong’ to mayor’s son
In Batanes, octogenarian dies of COVID-19
Duterte praises military but slams police for poor discipline, corruption
Don't miss out on the latest news and information.