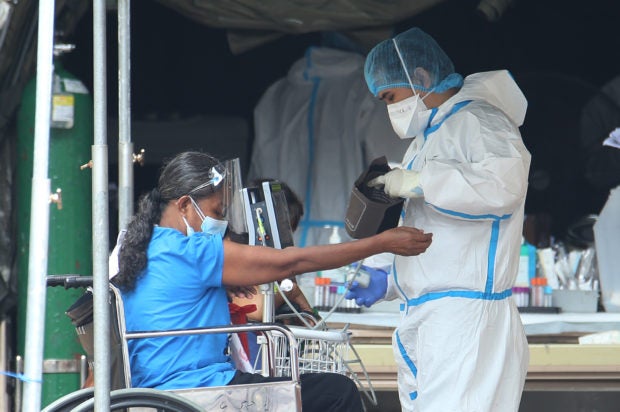 HERO OF THE TIMES A medical worker attends to a patient outside the National Kidney and Transplant Institute in Quezon City on Sunday, performing a heroic job in these difficult times. —NIÑO JESUS ORBETA

MANILA, Philippines — Seven out of 10 of the latest COVID-19 cases were found to be of the highly transmissible Delta variant, the Department of Health (DOH) reported on Sunday.

The DOH further disclosed that 90 percent of COVID-19 random samples sequenced by the Philippine Genome Center (PGC) were found to be of the three highly contagious variants, including the Alpha and Beta variants.

The department said Alpha and Beta cases remained the highest in the country, but also noted “a continuous and increasing detection of the Delta variant in the communities.”

Delta cases were spread across 13 of the country’s 17 regions, including Metro Manila.

Furthermore, the PGC found 41 cases of the P.3 variant first detected in the Philippines but not yet considered a variant of concern.

Last week, the DOH acknowledged the community transmission of the Delta variant in Metro Manila and the Calabarzon region, which is beginning to feel the impact of the rise of COVID-19 cases in the metropolis and elsewhere around the region.

Several hospitals in the Region 4A provinces of Cavite, Laguna, Batangas, Rizal and Quezon said they could no longer take in COVID-19 patients.

Among them were QualiMed Hospital and Laguna Holy Family Hospital Inc. in Laguna, and Mount Carmel Diocesan General Hospital and Lucena United Doctors Hospital and Medical Center (LUDHMC) in Quezon.

“COVID units are at full capacity and the neonatal intensive care unit is beyond capacity,” LUDHMC said.

In a phone interview on Sunday, Dr. Eduardo Janairo, director of the DOH Region 4A, said the number of patients from outside Calabarzon began climbing mid-August.

Most of them were admitted to the region’s major public facilities such as Southern Tagalog Regional Hospital in Bacoor City, Cavite; Dr. JP Rizal District Hospital in Calamba City and Cabuyao City Hospital in Laguna; and Batangas Medical Center in Batangas City. Janairo, however, noted that patients from outside were not only from Metro Manila.

“In Quezon, their hospitals are running full because of patients from Marinduque, while in Batangas, they are also taking in patients from Mindoro, Romblon,” he said.

Janairo said the region recently opened three temporary treatment management facilities in Batangas where mild and moderate COVID-19 cases would be transferred as hospitals aimed to free up their beds for severe cases.

“Right now, we could still manage. But our problem is the human resources,” he said, adding that the situation was a repeat of the previous surge in April.

In a separate interview, Dr. Rontgene Solante, secretary of the Philippine College of Physicians, said: “This is the longest surge we’ve experienced. I don’t know if a ‘time out’ will still work. We did an ECQ (enhanced community quarantine) and the numbers were high. Then we went into MECQ (modified enhanced community quarantine) and the numbers are still up.”

The DOH Region 4A has requested P38 million to hire and pay additional workers until December.

According to Janairo, the hospitals each needed about six to nine more staff members.

“I hope there would be applicants,” he said.

The DOH logged 18,528 new cases on Sunday, now the second highest number of daily reported cases as the COVID-19 caseload continues to pile up.

On the other hand, 101 more deaths, including 38 patients who were previously tagged as recovered, brought the total fatalities to 33,109.

Seven laboratories were not able to submit their data.

Read Next
Dumaguete reclamation proponent: ‘No turning back’
EDITORS' PICK
Acer starts the year off strong with the Aspire Vero National Geographic Edition
PH logs 37,070 more COVID-19 cases; over 33K others recover
The best of bayside and city living at SMDC’s Sail Residences
Comelec division junks petition to cancel Marcos COC for president
Marcos camp ‘extends hand of unity’ after COC cancellation bid is denied
Over 3 Million worth of prizes to be won at Smart Padala’s SENDali Manalo Promo!
MOST READ
NBI foils escape attempt of Kerwin Espinosa, two others
Comelec division junks petition to cancel Marcos COC for president
Francine Diaz’s manager denies actress is being courted by Seth Fedelin
‘Not my loss’: Did Kris Aquino just comment on her breakup with Mel Sarmiento?
Don't miss out on the latest news and information.