Dumaguete reclamation proponent: ‘No turning back’ 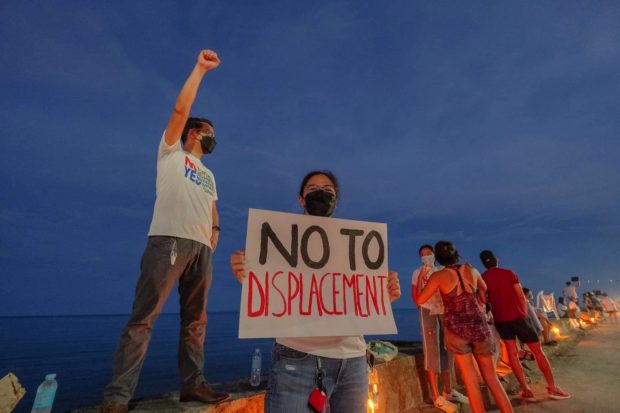 NO WAY: Environmentalists, fisherfolk and youth groups hold a candle-lighting protest at the boulevard of Dumaguete City on Aug. 13 to express their sentiments against the proposed 174-hectare reclamation project in the area. (Photo courtesy of DENNIZ FUTALAN)

DUMAGUETE CITY, Negros Oriental, Philippines – A private developer is bent on undertaking the 174-hectare reclamation project in this city despite opposition from various groups who raised its devastating impact on the marine environment and the coastal communities relying on fisheries for food and livelihood.

E.M. Cuerpo Inc. told the city council in a letter last week that it would proceed with the project that it said would offer the needed infrastructure and “jobs and livelihood, income through taxes and fees, a strengthened tourism industry and a workforce who don’t need to seek overseas employment.”

“It is unlikely for E.M. Cuerpo to back out,” said the firm’s legal counsel, Alaine Arnolf Palomo, in the letter.

Perdices was one of the councilors who lost by one vote when the city council voted 6-5 in July to grant Mayor Felipe Remollo the authority to enter into an agreement with E.M. Cuerpo for the reclamation project.

“We asked for numbers, we asked for figures, [but] all we got were sentences,” Perdices said.

Perdices’ sentiment was shared by the majority of the councilors who this time passed a resolution inviting E.M. Cuerpo to appear in their session on Sept. 8.

In its letter, E.M. Cuerpo said it was financially capable of undertaking the P23-billion project despite its lack of experience in reclamation work.

E.M. Cuerpo, one of the country’s leading construction companies, earlier entered into a memorandum of understanding with Poly Changda Engineering Co., a China government-backed reclamation firm, to subcontract the project in Dumaguete.

They assured stakeholders of Dumaguete that “no tremendous damage would be caused to the environment and the livelihood of fishermen.”

“On the contrary, [the source of food and livelihood] will be supplemented greatly by the jobs and business opportunities the project will generate,” E.M. Cuerpo said.

The contractor did not specify the technology that would be used for the reclamation nor did they show the detailed mitigation plans.

E.M. Cuerpo stressed it would not be assigning ownership of 49 percent of the reclaimed land to Poly Changda as payment for its reclamation services.

It said their project would infuse an initial investment of more than P23 billion, more than 40 times the city’s annual internal revenue allotment.

After the reclamation is completed, the contractor said new businesses in tourism, trading, technology, shipping, energy development, and education would come in.

The government stands to receive a 51-percent share of the reclaimed land, and 25 percent of the net income from the businesses generated there.

The contractor, on one hand, will own 49 percent of the reclaimed land and earn 75 percent from the net income of businesses developed in the area.