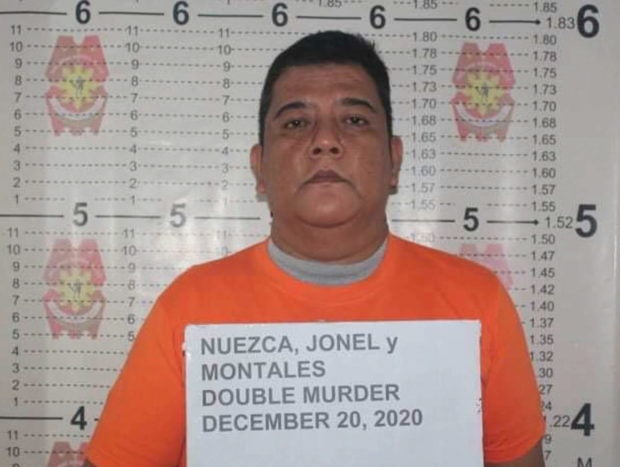 TARLAC CITY—Family members of a mother and her son who were killed by a police officer in Paniqui, Tarlac, days before Christmas last year wept for joy as a regional trial court (RTC) judge convicted him of double murder.

In an 18-page decision promulgated on Thursday, Judge Stela Marie Gandia Asunción of Paniqui RTC Branch 106 found Jonel Nuezca guilty of the murder of his neighbors, Sonya Gregorio, 53, and her son Frank Anthony Gregorio, 25, after a heated argument over an improvised noisemaker called a “boga.”

The fatal shooting on Dec. 20, 2020, was caught on video and quickly uploaded online, eliciting widespread shock and condemnation.

Now 47 and since dismissed as a police staff sergeant, Nuezca was meted a maximum of 40 years in prison for each murder conviction, which he is to serve simultaneously. He was ordered to pay a total of P952,560 in damages, half of which is to go to Sonya Gregorio’s heirs and the other half to her son’s heirs.

The chief of the Philippine National Police, Gen. Guillermo Eleazar, said justice had been served in Nuezca’s conviction.

“We understand that the punishment the court meted to Nuezca would not suffice to ease the loss and suffering of the Gregorio family. But this shows that our justice system works, and the PNP will not condone the [likes] of Nuezca,” Eleazar said in a video statement.

Nuezca pleaded not guilty when he was arraigned on Jan. 7 and was represented by a lawyer from the Public Attorney’s Office during the six-month trial.

But Judge Asunción ruled that the elements of treachery were present in the attack that was “deliberate and without warning,” and merited a conviction of murder.

“A ‘shoot first, think later’ disposition occupies no decent place in a civilized society. Never has homicide or murder been a function of law enforcement,” she said in her decision.

Asuncion noted that the case had been “sensationalized,” partly due to the people involved, “but more so because the felonious acts were recorded through a phone video and immediately uploaded in the social media.”

“In an ocean of public opinion, voices from the populace are drowning. Public trial is imminent,” the judge said.

But the court remained “independent” and “was not swayed by any social forces or influence” when it tried Nuezca, she said.

Freddy Villamor, legal counsel for the Gregorio family, described the decision as “exceptional” because it was handed down a month after the last hearing in July.

“I am very amazed with the dispatch [of the court]. The case was immediately resolved by the court and we thank Judge Asuncion, the media, and those who supported us,” Villamor told the Inquirer in a phone interview.

With Nuezca convicted, the widower, Florentino Gregorio, can now go back to working as a truck driver without fearing for the family’s safety, his eldest son Mark Christian Gregorio, said in a separate interview.

The son said his father had stopped working since the tragedy.

Speaking in a mix of Filipino and English, he said: “The money, we were not after it. What we were really after was justice, and here it is. It didn’t take years for us to get justice.”

He added that the family shed tears of happiness over the court’s ruling: “Umiyak kaming lahat sa tuwa.”

In finding Nuezca guilty, the court took into account that “the attack made by the accused” was “so swift and sudden that the victims were not able to defend themselves.”

“The shots fired were made in quick succession,” it noted.

Nuezca initially admitted the killings when he surrendered to police in nearby Rosales, Pangasinan, where he had fled, according to Rosales police chief Fernando Fernandez.

Fernandez quoted Nuezca as having told investigators that he was “fed up” with the Gregorios’ behavior.

Paniqui police chief Lt. Col. Noriel Rombaoa said Nuezca had confronted Frank Gregorio for firing a boga and tried to arrest him, which resulted in a tussle.

A neighbor filmed the goings-on using a mobile phone and uploaded the video on Facebook .

In the video, Sonya Gregorio was heard pleading with Nuezca not to arrest her son, but the cop drew a 9mm M-92 pistol and began to drag him away.

The mother embraced her son tightly in an effort to prevent his arrest.

Nuezca’s young daughter approached and said loudly: “My father is a policeman.”

Witnesses said this further enraged Nuezca, who then shot the mother twice and then the son also twice.

The two were already on the ground but Nuezca fired more shots at them, witnesses said.

“After that, he took his jacket and helmet then left with his daughter on a motorcycle,” a witness told the Inquirer at that time.

Police said Nuezca briefly went into hiding in a relative’s house in Urdaneta City in Pangasinan after the shooting and later surrendered to Rosales police.

According to Tarlac provincial police chief Col. Renante Cabico, the deadly altercation was also triggered by an old feud over a right-of-way issue in the properties of Nuezca and the Gregorios in Barangay Cabayaoasan, Paniqui.

At the time of the shooting, Nuezca, who was assigned at the police crime laboratory in Parañaque City, was off duty and at home when the boga went off.

A month after the crime, the National Capital Region Police Office dismissed Nuezca from the service.

Florentino Gregorio testified in court on Feb. 4 to affirm his demands for civil liability and for over P70 million in civil and exemplary damages.

On Feb. 18, the 16-year-old girl who took a video of the killings testified against Nuezca, positively identifying him as the one who shot Sonya and Frank Gregorio.

Another cop on trial

The trial of another dismissed policeman, Master Sgt. Hensie Zinampan, is ongoing.

Also caught on video was the fatal shooting of Lilybeth Valdez, 52, by a drunken Zinampan last May 31 in Fairview, Quezon City.

“Both the cases of Nuezca and Zinampan will serve as a lesson that will constantly remind us that as police officers, we are the protectors of the Filipino people, and not their tormentors,” the PNP chief said.

Eleazar recently ordered the creation of a database of dismissed rogue cops to prevent them from being reinstated in the police force.

Since 2016, more than 5,000 police officers have been dismissed for various offenses as part of the PNP’s “intensified” internal cleansing program. —With a report from Dexter Cabalza