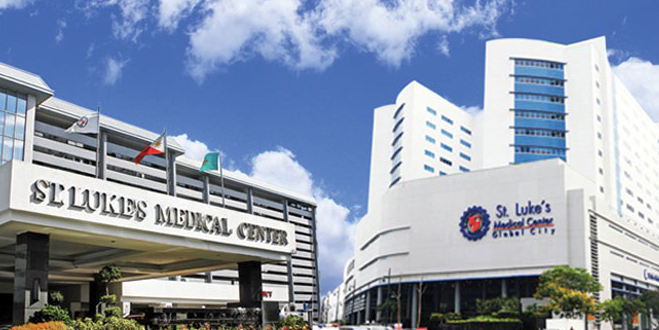 Photo of St. Luke’s Medical Center in Quezon City and in Bonifacio Global City. Screengrabbed from the St. Luke’s website

Already saddled with the influx of COVID-19 patients, hospitals, particularly those privately run, also are facing the challenges of keeping their workforce intact.

One of the largest private hospitals, St. Luke’s Medical Center (SLMC), is having such a “workforce problem.”

But SLMC executive vice president and chief medical officer Benjamin Campomanes clarified that it was not due particularly to low salaries. Many of their staff had to go into quarantine, he said.

SLMC announced earlier that its COVID-19 wards and critical care units, both in Taguig City and Quezon City, were running at full capacity as of Aug. 25 and many patients in critical condition were still waiting for admission to the emergency department.

“Given this current situation, we kindly request those experiencing COVID-19 symptoms to seek immediate care from other health-care institutions for the meantime,” the hospital said in a public announcement.

On Thursday evening, Campomanes said there were four patients waiting to get a room in the COVID-19 ward in Quezon City and eight were lined up for admission into the intensive care unit (ICU) and the ward in Taguig.

The hospital situation was “very fluid, very dynamic” but the staff would not turn COVID-19 patients away, he said.

“Workforce is the problem now. I’ll give you an example. From an original 66 nurses in the emergency room in (Taguig City) we are now down to only 43,” he said in an earlier radio interview.

He denied that a “mass resignation” was taking place although he said that most of St. Luke’s nurses were leaving for work abroad.

He admitted 25 to 26 resignations a month. The nurses are hired in the United States, United Kingdom and “other places” where they are accepted, he said.

“This is not very unusual for us. Since prepandemic we have had this number of nurses resigning,” Campomanes said.

But a St. Luke’s employee, who requested anonymity for fear of reprisal, said it was difficult to ascertain the number of resignations that were taking place almost “every day” for the last couple of weeks but that all the hospital units were having staffing problems.

“Each unit lacks roughly 30-40 percent of manpower,” the employee said.

In a phone interview, Philippine Hospital Association President Dr. Jaime Almora said hospitals truly have problems with regard to keeping their employees.

He said in his northern Luzon hospital, he also had problems with medical technicians who went on strike demanding a pay raise. He said he explained to them that the hospital had to give nurses an increase first.

“I thought that would do but four or five days ago, they went on strike and didn’t go to work,” Almora said.

He said the government’s failure to reimburse payments to hospitals for COVID-19 cases had affected their operations, especially the privately run hospitals.

He said at least two that were run by religious groups in Mindanao and in Visayas were forced to shut down recently.

“Some nurses are moving to public hospitals. We could never match the salary (offered),” he said.

But despite the higher pay, government nurses like those at Jose Reyes Memorial Medical Center were still leaving, according to Robert Mendoza, Alliance of Health Workers president.

Mendoza said around 30 nurses have resigned from the hospital since January.

On Wednesday, workers at Jose Reyes staged a protest to demand the release of their hazard pay, their special risk allowances and their allowances for meals, accommodation and transportation.

Philippine Nurses Association President Melbert Reyes said they were grateful for the new guidelines issued by the Department of Budget and Management to implement the higher entry salary grade for government nurses and reinstating those who were demoted by the policy.

“But we know it’s not yet a total victory and we have to keep watch of its implementation. We really hope this is not just on paper,” he said.