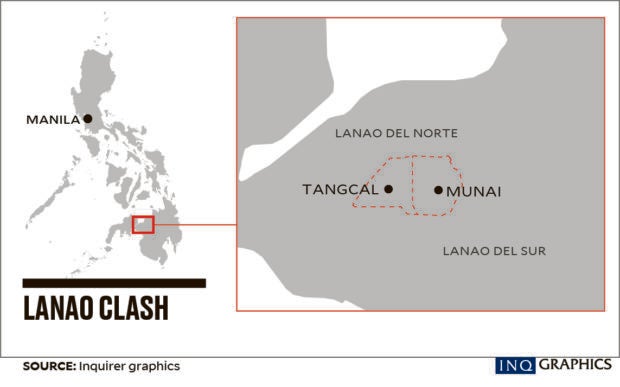 ILIGAN CITY—Government troops have been sent to communities near the borders of Lanao del Sur and Lanao del Norte provinces to protect civilians from Islamic State (IS)-linked armed groups following recent clashes in the area, a military official in northwestern Mindanao said.

Maj. Gen. Generoso Ponio, commander of the Army’s 1st Infantry Division, assured residents of Munai and Tangcal towns in Lanao del Norte that government soldiers would be stationed near their communities to thwart the entry of IS gunmen.

“We assure the public that we will respond to their call, 24/7, to secure and protect them from any threats, and to sustain the peace and progress in our area of responsibility,” Ponio said, as displaced residents were advised to return to their villages.

He also urged residents to continue reporting to authorities any threat and illegal activities in their villages as well as the presence of suspicious individuals.

3-hour firefightCol. Rey Alemania, commander of the Army’s 2nd Mechanized Infantry Brigade, which has jurisdiction over Lanao del Norte, said troops were deployed as blocking forces in the boundary with Lanao del Sur to prevent a spillover of skirmishes as soldiers pursued the armed men.

A group of 30 IS fighters clashed with soldiers for three hours in the boundary of Munai and Tangcal towns on Aug. 21, prompting residents to flee their homes.

A report from Tangcal’s municipal disaster risk reduction and management office said the families stayed with their relatives in nearby villages or in “madrasah” (school) and barangay gymnasiums which were designated by the local government as evacuation centers.

Brig. Gen. Jose Maria Cuerpo, commander of the 103rd Infantry Brigade which has jurisdiction over Lanao del Sur, said soldiers were on combat operation when they encountered the armed men. The operation was launched after the military received reports that armed men were asking villagers to buy them food.

Cuerpo said the skirmishes started in the hinterlands of Madamba and Madalum towns in Lanao del Sur before clashes reached Munai and Tangcal towns.

During the operation, Cuerpo said government troops overran the armed group’s temporary camp where they were believed to be manufacturing bombs. Recovered from the site were personal belongings, several improvised bombs that were later detonated and bomb-making materials.

The Aug. 21 clash was the second time that government troops faced local IS forces in Lanao del Norte this year. In January, IS gunmen killed three off-duty Army soldiers and a civilian in an ambush in Poona-Piagapo town.