Galvez asked: Is nat’l gov’t holding back jab deals to hog the glory for rollout? 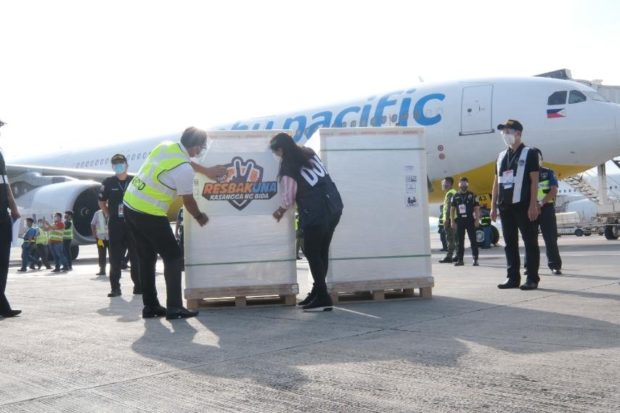 The latest batch of one million doses of Sinovac’s COVID-19 vaccine arrive via a Cebu Pacific flight at the Ninoy Aquino International Airport on Thursday, June 10, 2021. (Photo courtesy of National Task Force against COVID-19)

MANILA, Philippines — Is the national government “holding back” multi-party vaccine deals of local governments and private firms to claim the glory for the COVID-19 vaccination program?

The senator earlier sought an explanation from the national government for the hanging requests of 42 LGUs and about 300 private companies to procure a total of 10 million COVID-19 vaccine doses.

(Some issues are being thrown at me, secretary, it may just be pogi (brownie points) that the government just wants them to give the vaccine, and anyone else can’t do it so that at election time, the government can claim it vaccinated you and not anyone else? Isn’t that so?)

Vaccine czar Sec. Carlito Galvez Jr., however, denied that it was the case.

During the hearing, the vaccine czar also reiterated why the multi-party agreements (MPA) for local governments and private sector purchases for a total of 10 million doses have either been put on hold or have not been signed.

In the case of Sinovac, Pfizer and Sputnik, Galvez said that these vaccine developers intend to prioritize orders from the national government given the current shortage.

“Moderna and AstraZeneca are no longer accepting vaccine orders for the Wave 1 through the MPAs for the time being,” he added.

“Johnson & Johnson and Sinopharm are currently not open to MPA as provided under R.A. 11525 (COVID-19 Vaccination Program Act of 2021),” Galvez further said.

Enough supply for all regions

Nevertheless, Galvez assured the senator that the national government would distribute “the majority of the volumes in millions” equitably among the different areas so that “all provinces and all regions will receive their share.”

Zubiri responded that this is what local government units would want to hear.

“There are LGUs waiting in line; they want to find out [whether they’ll be given vaccines or not], if it’s in trickles or not because they’re trying to order,” the senator said.

“So what you’re trying to tell us is [we have vaccines from the government]?” he asked. Galvez answered in the affirmative.

So far, the government has administered a total of 30,693,019 doses of COVID-19 vaccines since the vaccination drive started in March.