1Sambayan on Duterte’s VP bid: ‘A clear mockery of our Constitution’ 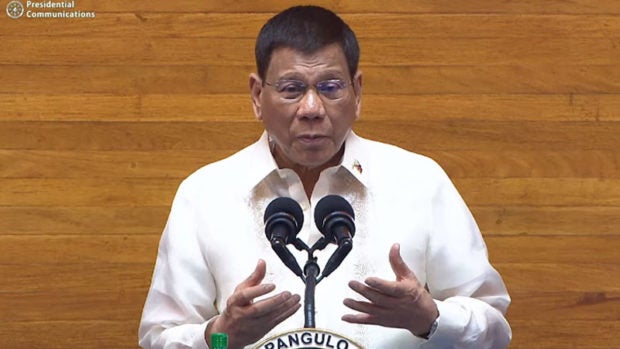 President Rodrigo Duterte delivers his final State of the Nation Address on Monday, July 26, 2021, at the Batasang Pambansa. Screenshot from RTVM youtube live

MANILA, Philippines — Opposition coalition 1Sambayan denounced on Tuesday President Rodrigo Duterte’s acceptance of his nomination by the PDP-Laban to be its candidate for vice president in 2022 — despite numerous allegations of corruption in various agencies, continuing drug war killings, and the death of 30,000 Filipinos in what the group called “a failed COVID-19 response.”

“It shows a clear mockery of our Constitution and democratic process. Obviously, this is driven by fear of accountability both from the ICC [International Criminal Court] and from our own justice system,” 1Sambayan said in a statement.

“The candidacy is both legally and morally wrong, and we trust that the Filipino people will realize his brazen, selfish, and self-serving motives,” it added.

Because of this, 1Sambayan said it had become more determined in unifying democratic forces and in presenting an alternative candidate for the May 2022 election.

The PDP-Laban first adopted a resolution in May to “convince” Duterte to run for the vice presidency in 2022.

Then early this month, the party endorsed the tandem of Sen. Christoper “Bong” Go and Duterte.

Meanwhile, 1Sambayan has not selected its candidates for president and vice president.

The coalition is expected to announce its official candidates around the time of the filing of candidacy in the first week of October.