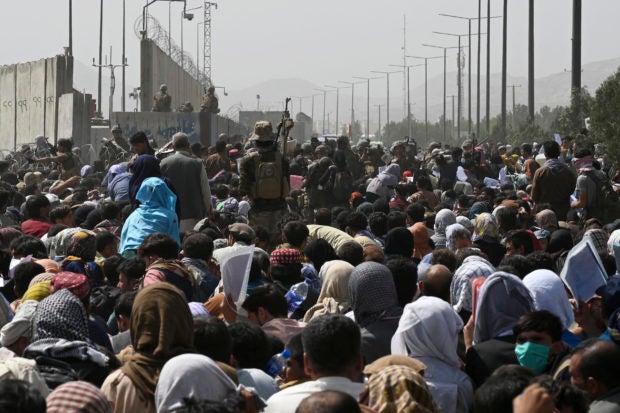 Afghans gather on a roadside near the military part of the airport in Kabul on August 20, 2021, hoping to flee from the country after the Taliban’s military takeover of Afghanistan. (Photo by Wakil KOHSAR / AFP)

Kiev, Ukraine — Ukraine’s deputy foreign minister said Tuesday that one of the country’s jets had been hijacked at Kabul airport earlier this month in a version of events later denied by his own ministry.

Yevgeny Yenin told the independent Hromadske radio station that a Ukrainian plane had been “hijacked” in Kabul and flown to Iran “with a group of unknown passengers on board, instead of evacuating Ukrainians.”

Yenin confirmed to AFP that the incident took place on August 15 and that the plane subsequently returned to Ukraine.

But his comments were then denied by the foreign ministry.

“There are no Ukrainian planes hijacked in Kabul or elsewhere,” spokesman Oleg Nikolenko told AFP, saying that Yenin’s words “do not correspond to reality”.

He said three planes — two civilian and one military — that Kiev chartered to evacuate its citizens from Afghanistan “safely returned to Ukraine” carrying a total of 256 passengers.

A source in the government told AFP that Kiev had been negotiating to include the aircraft mentioned by Yenin — a civilian Ukrainian plane — in its evacuation operations but was not able to do so after the plane left without warning last week.

“We wanted to charter it, but it left without taking anyone,” the source said.

“Nobody hijacked it,” the source added, without specifying the plane’s destination or the date of its departure.

Ukraine has so far organized three evacuation flights from Kabul. They took place on August 15, 21, and 23, carrying both Ukrainians and Afghans including Sahraa Karimi, one of Afghanistan’s most prominent women filmmakers.

Read Next
WHO says only has week of medical supplies left in Afghanistan
EDITORS' PICK
House energy committee chair Arroyo bats for cheap electricity
Taal still showing signs of unrest
TNT brings Sarah G and Mimiyuuuh together for epic collab
COVID-19 wave may reach ‘ber’ months
Hard times force even seniors to look for jobs
SMDC all set for growth, prepared to face market resurgence
MOST READ
Tagle one of cardinals eyed to become next pope, says report
Pop music and ‘Grease’ star Olivia Newton-John dead at age 73
Kulturkampf: ‘Katips’ vs ‘Maid in Malacañang’
‘Not right’ to call procurement of laptops ‘anomalous’ – DepEd
Don't miss out on the latest news and information.