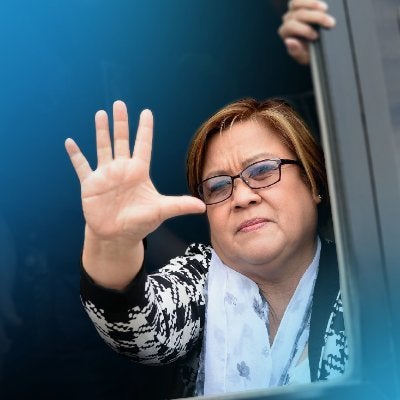 NAGA CITY—Detained opposition Senator Leila De Lima said Tuesday in a letter she wrote from the Philippine Custodial Center that her “unjust conviction” would not get in the way of her bid to seek re-election in the 2022 national elections.

The letter, dated Aug. 24, was read by Senator De Lima’s cousin Marjorie Magistrado during the launch of the ‘Laban Leila 2022’ movement here Tuesday.

In her letter, De Lima said her unjust detention and political persecution fueled her desire, even more, to fight and seek re-election in the 2021 polls. She also thanked those who continuously believe in her.

“Your unfailing support has sustained my fighting spirit all through these years of incessant persecution,” her letter read.

De Lima has been detained for almost five years now over President Duterte’s “trumped-up charges” against her. She was the first political prisoner under the Duterte administration.

Meanwhile, lawyer Phillip Sawali, De Lima’s chief of staff, said they were not certain if De Lima would be vindicated before the filing of certificates of candidacy but assures the public that she would be free soon.

Sawali also said De Lima would still be running under the Liberal Party.

Asked how De Lima will campaign while in custody, Sawali said they would rely on volunteers, friends, and allies in local governments and the national government.

In a video played during the campaign here, Robredo said “the five-year unjust detention [of De Lima] will be greatly remembered by history as a time of great injustice.”