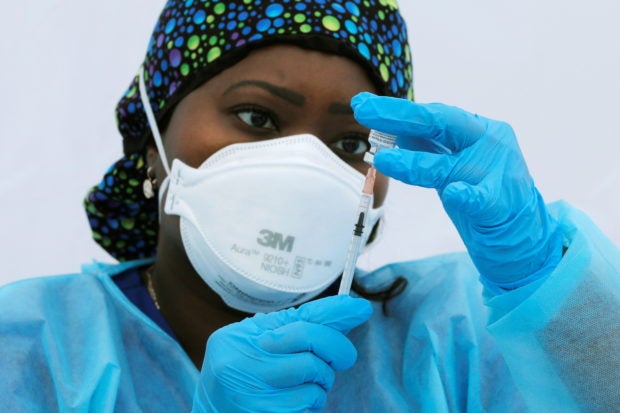 Registered nurse Sheba Phillip prepares a syringe with a dose of the Pfizer-BioNTech vaccine for the coronavirus disease (COVID-19), during a vaccination event for local adolescents and adults outside the Bronx Writing Academy school in the Bronx borough of New York City, New York, U.S., June 4, 2021. REUTERS FILE PHOTO

NEW YORK — New York City will require public school teachers and staff to get vaccinated against COVID-19, Mayor Bill de Blasio said on Monday, part of a push to get more residents inoculated and slow the spread of the highly contagious Delta variant.

All 148,000 staff members in the largest U.S. school district must get at least one dose of a vaccine by Sept. 27 as part of the mandate, de Blasio said. In a first for city employees, Department of Education staff will no longer have the option to submit to weekly testing instead.

U.S. educators and parents have been grappling with how to keep schools safe and open as the country battles another coronavirus surge just as students head back to the classroom.

“We want our schools to be extraordinarily safe all year long,” de Blasio told a news conference.

School is set to begin in New York City on Sept. 13. Elsewhere in the country, thousands of children returned to classrooms on Monday.

In Springfield, Virginia, Christy Hudson, 43, said she “breathed a huge sigh of relief” on Monday morning when her son, a high school sophomore, boarded his bus to attend class in person after getting remote instruction all of the last school year.

“I’m cautiously optimistic, but there’s still quite a lot of uncertainty,” Hudson said. “There are going to be positive cases, certainly, but how will the school react to that?”

The announcement in New York City followed news on Monday that the U.S. Food and Drug Administration had granted full approval to the Pfizer Inc/BioNTech SE <> COVID-19 vaccine.

Shortly after the FDA’s announcement, the Pentagon said it was preparing to make the vaccine mandatory for U.S. military personnel.

Chicago Mayor Lori Lightfoot said on Monday that city employees would be required to be vaccinated, but did not specify when the mandate would go into effect.

“It’s for the safety of all involved, particularly members of the public who are interacting with city employees on a daily basis. It’s important for colleagues to also feel like they have a workplace that’s safe,” she told a news conference.

New Jersey Governor Phil Murphy said on Monday that all state employees, including educators, would be required to get vaccinated or get tested “at a minimum of once to twice each week.”

Earlier this month, New York City required proof of COVID-19 vaccination at restaurants, gyms and other businesses. The mandate sparked backlash from some business owners and residents who sued de Blasio.

Michael Mulgrew, president of the United Federation of Teachers (UFT), said the union’s priority was to keep children safe and school open. But he added in a statement that “there are many implementation details, including provisions for medical exceptions, that by law must be negotiated with the UFT and other unions, and if necessary, resolved by arbitration.”

Efforts to increase vaccination rates and implement public safety measures like mask wearing in schools have faced staunch opposition in some parts of the country, especially in some Southern states that have been hard hit by the Delta variant.

In Florida, some school districts now face the potential loss of some public funding because they mandated masks in defiance of a ban on that step by Republican Governor Ron DeSantis.

Texas Governor Greg Abbott is another Republican who has acted to block local officials from mandating face coverings. He was dealt a setback late last week when the state’s Supreme Court temporarily allowed schools to keep mask mandates in place.