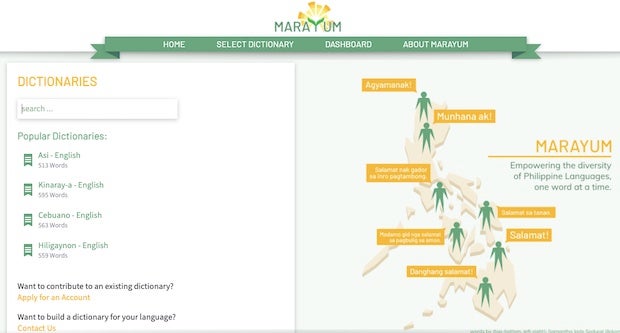 MANILA, Philippines — At a loss for words on how to express your gratitude in Ilocano, Tuwali-Ifugao, or Cebuano?

With the help of Marayum, an online dictionary, Filipinos can now express themselves in different Philippine languages and also discover the meaning of words spoken in other places.

Marayum, which means wise words, is used by the Asi ethnolinguistic group in Romblon province.

The project was funded by the Department of Science and Technology (DOST) and led by a team of computer scientists and linguists from the University of the Philippines (UP) in Diliman, Quezon City. It seeks to develop an online dictionary to “preserve and save endangered Filipino languages.”

It also aims to “empower native language speakers to create and curate an online dictionary of their language without needing to have technical expertise in website design, implementation and maintenance,” according to the DOST.

Registered members of a specific community who speak and practice a language can make their own entries or modifications which will be reviewed by a group of assigned language experts.

The online dictionary, which can be accessed via marayum.ph, features, for now, an initial four languages—Asi, Cebuano, Hiligaynon and Kinaray-a—along with the corresponding English translation.

“The national language is as symbolic as the country’s own freedom, giving its unique identity as a sovereign nation. This Buwan ng Wika, we can also celebrate other local languages in the country through this project,” said Enrico Paringit, executive director of the DOST’s Philippine Council for Industry, Energy and Emerging Technology Research and Development.

The Marayum team, headed by project leader Mario Carreon, an assistant professor at the Department of Computer Science in UP Diliman, is also the same group handling the International Year of Indigenous Languages in the Philippines website.

And by the way, thank you is “Agyamanak” in Ilocano, “Munhana ak” in Tuwali-Ifugao and “Salamat sa tanan” in Cebuano.