Taliban warns of ‘consequences’ if US extends evacuation 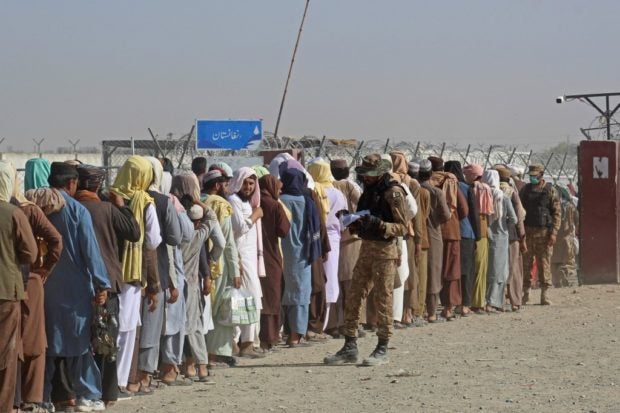 Pakistan’s soldiers check the documents of Afghan and Pakistani nationals for crossing into Afghanistan at the Pakistan-Afghanistan border crossing point in Chaman on August 22, 2021, following the Taliban’s stunning takeover of Afghanistan. AFP Photo

Kabul, Afghanistan — The Taliban warned on Monday there would be “consequences” if the United States and its allies extend their presence in Afghanistan beyond next week, as chaos continued to overwhelm Kabul airport.

The hardline Islamists’ takeover of the country last weekend shocked Western nations, coming just two weeks before an August 31 deadline for all troops to fully withdraw from the country.

To manage the chaotic airlifting of foreigners and Afghans — many of whom fear reprisals for working with Western nations — thousands of soldiers have poured back into Afghanistan, with pressure growing on Washington to extend the deadline.

But the Taliban, who have so far sought to strike a more moderate tone, showed no willingness to compromise on the US pullout.

“If the US or UK were to seek additional time to continue evacuations — the answer is no. Or there would be consequences,” Taliban spokesman Suhail Shaheen told Sky News on Monday.

Staying beyond the agreed deadline would be “extending occupation,” he added.

Two Taliban sources meanwhile told AFP the group would not announce the makeup of its government or cabinet until the last US soldier has left the country.

The rush to leave Kabul has sparked harrowing scenes and killed at least eight people, some crushed to death while at least one person died after falling from a moving plane.

One Afghan was killed and three others were injured in a dawn firefight on Monday that, according to the German military, erupted between Afghan guards and unknown assailants.

German and American troops “participated in further exchange of fire,” the German army said in a statement.

The Taliban, infamous for an ultra-strict interpretation of sharia law during their initial 1996-2001 rule, have repeatedly vowed a softer version this time.

President Joe Biden has insisted he wants to end the US military presence and the airlifts by August 31.

But with the European Union and Britain saying it would be impossible to get everyone out by then, Biden is under pressure to extend the deadline. 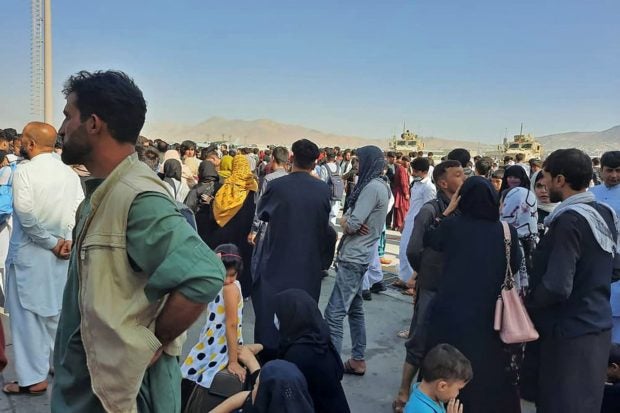 Speaking at the White House on Sunday, Biden said talks were underway to explore the possibility of extending the deadline.

He also acknowledged the tragic scenes at the airport, which have included babies and children being passed to soldiers over razor-wire fences and men clinging to the outside of departing planes.

But he said they were part of the cost of departure.

“There is no way to evacuate this many people without pain and loss and heartbreaking images you see,” he said.

In the streets of the capital, the Taliban have enforced calm of a kind, with their armed forces patrolling the streets and manning checkpoints.

Visually, they have also been looking to stamp their authority, ensuring the tri-colored national flag is replaced with their white banner.

At a roadside in Kabul at the weekend, young men sold Taliban flags, which bear in black text the Muslim proclamation of faith and the regime’s formal name: “Islamic Emirate of Afghanistan.”

“Our goal is to spread the flag of the Islamic Emirate throughout Afghanistan,” said seller Ahmad Shakib, who studies economics at university.

Outside of Kabul, there have been flickers of resistance against the Taliban.

Some ex-government troops have gathered in the Panjshir Valley, north of the capital — long known as an anti-Taliban bastion.

The Taliban said Monday their fighters had surrounded resistance forces holed up in the valley, but were looking to negotiate rather than take the fight to them.

Taliban fighters “are stationed near Panjshir”, spokesman Zabihullah Mujahid tweeted, saying they had the area surrounded on three sides.

“The Islamic Emirate is trying to resolve this issue peacefully,” he added.

One of the leaders of the movement in Panjshir, named the National Resistance Front, is the son of famed anti-Taliban commander Ahmad Shah Massoud.

The NRF is prepared for a “long-term conflict” but is also still seeking to negotiate with the Taliban about an inclusive government, its spokesman Ali Maisam Nazary told AFP in an interview on the weekend.

“The conditions for a peace deal with the Taliban are decentralization, a system that ensures social justice, equality, rights, and freedom for all,” he said.