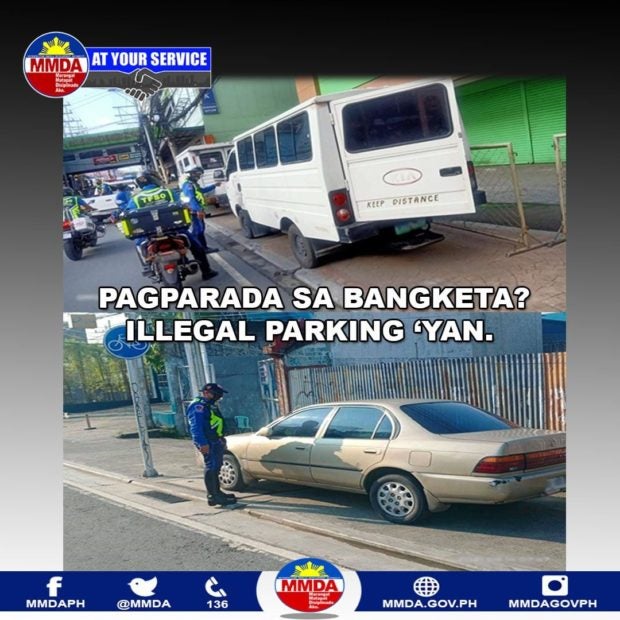 MANILA, Philippines — The Metropolitan Manila Development Authority (MMDA) on Monday warned motorists parking their vehicles along main roads and sidewalks, as it vowed to step up its clearing operations, especially along so-called Mabuhay Lanes, to ensure easy flow of traffic in the metropolis.

According to the MMDA, vehicles parked on roads and side walks are obstructions that adversely affect the movement of cars as well as pedestrians, respectively.

(Vehicles parked along the road are one of the causes of the heavy flow of traffic, that’s why the MMDA Task Force Special Operations and the local governments are still doing clearing operations along the primary roads in Metro Manila, especially the Mabuhay Lanes.)

(Motorists should also not park on the sidewalks as these are meant for people to use.)

The MMDA posted photos on Facebook showing some vehicles, including a utility van and a sedan parked on the sidewalk despite ordinances outlawing it.

Some motorists’ habit of indiscriminate parking has become a national concern that President Rodrigo Duterte himself had to direct the Department of the Interior and Local Government (DILG) in his 2019 State of the Nation Address to impose clearing of main roads nationwide and hold local government officials liable if they fail to do it. This order came amid worsening traffic conditions in Metro Manila and other places across the country.

In August 2019, DILG Secretary Eduardo Año set a 60-day deadline for local executives to clear their roads.  By early 2020, the DILG reported that it has filed administrative complaints against 10 mayors who failed to comply with the President’s directive.