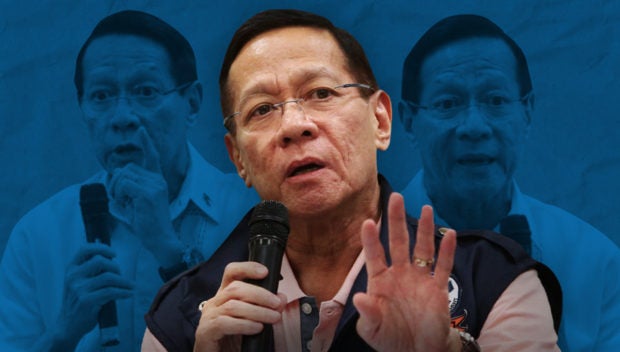 MANILA, Philippines — Health Secretary Francisco Duque III on Sunday called on hospitals and the Philippine Health Insurance Corp. (PhilHealth) to continue discussions to iron out their worsening dispute, hopefully before the expiration of the PhilHealth accreditation of hospitals in December 2021.

“PhilHealth is having a continuing dialogue with the hospitals to resolve issues such as the TSPC,” Duque said, referring to PhilHealth Circular No. 0013, or the temporary suspension of payment of claims, that was made public on Aug. 20.

PhilHealth had justified the circular as a fraud-control measure after the agency was investigated for its P153.7 billion in losses from 2013 to 2018.

The House committee on health has also scheduled a dialogue on Tuesday, Aug. 24, between PhilHealth and the hospital associations.

Quezon Rep. Angelina Helen Tan, chair of the House health committee, said she called the meeting to clarify the disputed circular and provide a venue for both parties to resolve their differences.

“We want to hold a dialogue between PhilHealth and the hospitals. We do not want the bridge to collapse,” Tan said in a statement.

“We want to rebuild whatever trust and partnership that are left between the state health insurer and our health-care institutions or providers. We cannot allow this conflict to persist in the face of the worsening pandemic in the country,” she added.

They said PhilHealth’s accusation against health-care institutions of supposed fraud was unacceptable.

PhilHealth officials did not respond to requests for comment on Sunday.

“The health-care providers view this … as another ploy to deny or delay the payment of claims,” their statement said, adding that their organizations have “listened, tried to understand, pleaded and even worked together with PhilHealth,” but the state insurer has not been cooperative.

“PhilHealth is just too far at the other end of the bridge to hear the pleas of health-care providers,” the health-care associations said.

Despite PHA, PMA and PHAP’s decision to move away from PhilHealth, they assured the public that its members would continue to serve PhilHealth-covered patients “while their members’ contracts with PhilHealth are still in effect until this December of 2021.”

The DOH earlier responded by sending the press statement that PhilHealth issued on Friday, saying that while Circular No. 2021-0013 was new, the policy has been in place since 2016.

In the statement, PhilHealth spokesperson Shirley Domingo said the temporary suspension of payment of claims was updated and the recent circular was “issued in the spirit of proper fund management and fraud control.”

PhilHealth also assured its members and accredited providers that all valid claims would not be affected by the policy.

A set of recent policies and mismanagement by the regional evaluators of PhilHealth further strained the relationship between health providers and the state insurer, to the detriment of patients and health workers in the middle of the COVID-19 crisis.

Dr. Jaime Almora, PHA president, said cutting ties by not renewing hospitals’ accreditation would be a natural consequence should PhilHealth implement Circular No. 2021-0013.

The hospitals were given by the circular a narrow window of only three days to answer, while the suspension of payment could last up to eight months.

“Hospitals are left with no recourse,” Almora said in a phone interview on Sunday.

Almora said the circular came as a surprise to them, especially since they just had a meeting with PhilHealth and the Anti Red-Tape Authority to resolve the P73 billion in unpaid claims, mostly for COVID-19 patients, from January 2020 to June 2021.

Almora questioned the timing of the circular, which he felt was PhilHealth’s strategy to deflect attention from House Resolution No. 1966, which was adopted by the House committee on health last week, urging PhilHealth to review its COVID-19 package and possibly include the coverage of probable COVID-19 cases.

Dr. Jose de Grano, president of PHAP, also on Sunday said it was unfair of PhilHealth to suspend payment of claims to an entire hospital on mere suspicion of a fraudulent case.

De Grano also hit PhilHealth Circulars No. 0011 and No. 0012, both published on Aug. 7. The first orders hospitals to return previously reimbursed money when PhilHealth should later resolve it as an overpayment, while the second modifies the fixed case rate.

Almora said that hospitals were willing to stay under PhilHealth if the agency could hire more clinicians as health claims evaluators on the ground.

He said an impartial, third party should also conduct the investigation on health claims and not PhilHealth itself, which would make it act as “the accuser, adjudicator and executioner.”

“It is like, we (the hospitals) are the lender and PhilHealth is the borrower. But what’s happening here is that the ‘borrower’ is the one that decides when to pay and sets the conditions,” he said.

Almora said hospitals would never shut its doors to PhilHealth members nor deny people from accessing their health contributions.

“That money is the people’s money. We could [resort] to direct reimbursement, meaning the patient will have to pay the hospital first, then PhilHealth will reimburse him,” he said.

—WITH A REPORT FROM PATRICIA DENISE M. CHIU