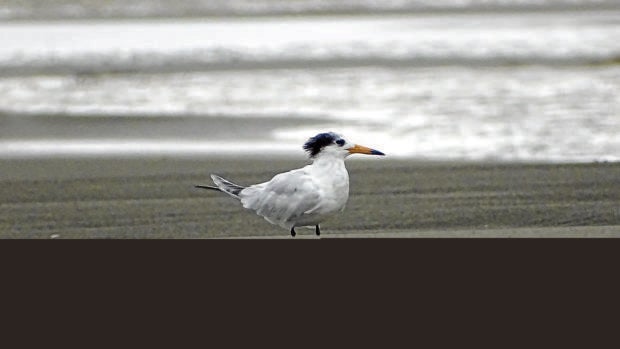 The arrival of a globally endangered bird in the Philippines has caused excitement among conservationists here, reinforcing the importance of Philippine wetlands and coastal habitats for migratory birds.

The bird, a Chinese crested tern (Thalasseus bernsteini), was first spotted in Pangasinan province on Aug. 5 by local bird watcher Kim Manzon Cancino, who has been monitoring the Lingayen Gulf for migratory species the past year.

Cancino said he was “shaking with excitement” upon finding the rare visitor which he identified from other terns by its pale grey plumage and orange bill with a striking black tip.

The bird watcher was able to take photos and a video of the bird as it remained in sight for two days. This record was verified by the Philippine Bird Rarities Committee—only the third sighting in Luzon in the last 116 years, and the first in Pangasinan.

The Chinese crested tern is one of the world’s rarest species, considered as facing the highest possible risk of extinction because less than 100 of this species survive and breed in a handful of islands off China, Taiwan and South Korea.

In winter the birds migrate south as far as Indonesia. The highest known wintering congregation consisted of up to four at Panabo on the coast of Davao del Norte.

The latest sighting suggests that the Philippines is the most important passage and wintering area for the species.

If one were to go by Cancino’s observations, the shores of the Lingayen Gulf appear to be an important feeding area for many species of migratory shorebirds.

Other rare visitors already recorded in the area include the Aleutian tern (Onychoprion aleuticus), Greater scaup (Aythya marila), and Lesser black-backed (Larus fuscus) and Slaty-backed (Larus schistisagus) gulls which had been sighted less than 20 times in the country.

These species rely on the Lingayen Gulf and its coastline to feed during their long-distance migrations, according to Arne Jensen of Wetlands International.

He said: “The Philippines lies on the East Asian-Australasian Flyway and its inland and coastal wetlands provide feeding areas for internationally important numbers of waterbirds and seabirds. The appearance of the Chinese crested tern in Pangasinan confirms that the coastlines of the Philippines are a stronghold for the species outside the breeding season.”

Recently announced plans for the further development of the 13-kilometer Lingayen Baywalk could irreparably damage the critical feeding areas of these migratory species, according to Jensen.

“We must do all we can to protect this critically endangered species threatened with global extinction. Many of the coastal areas in the Philippines used by migratory species are threatened by proposed reclamation or other infrastructure developments. It is vital these developments do not destroy critical habitats,” he said.

Lingayen Mayor Leopoldo Bataoil said he supported Cancino’s conservation efforts as he promised a “proenvironment and pronature” administration that would “make Lingayen the model and template of modernization while preserving biodiversity.”