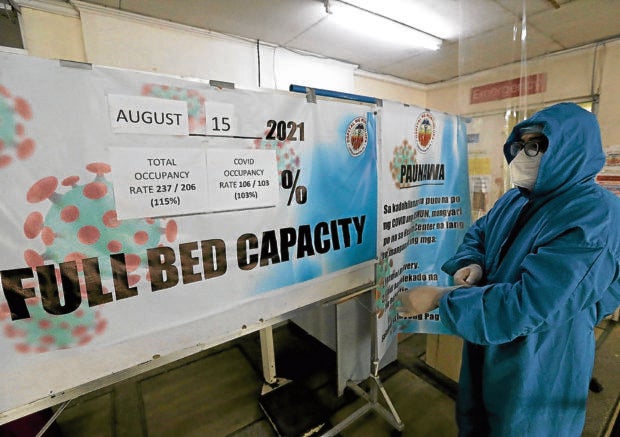 NO VACANCY Like many other hospitals in the country, the Ospital ng Muntinlupa in Muntinlupa City exceeded its bed capacity as early as Sunday last week. —RICHARD A. REYES

MANILA, Philippines — As Metro Manila ended a two-week hard lockdown on Aug. 20, the occupancy rate in 332 hospitals or 27 percent of the country’s 1,220 health facilities that treat COVID-19 patients was already critical at more than 85 percent, while in 172 others, it was considered high risk at 70-85 percent, according to the Department of Health (DOH).

It said nearly three-fourths or 73 percent of the country’s intensive care unit (ICU) beds and close to two-thirds or 64.5 percent of hospital beds were occupied.

The DOH added that 61 percent of total isolation beds and 66 percent of ward beds were occupied, while half of the mechanical ventilators were in use.

In Metro Manila, three out of four ICU beds and two out of three hospital beds were occupied as of Aug. 20.

The DOH reported that 61 percent of isolation beds, 72 percent of ward beds, and 57 percent of mechanical ventilators in the capital region were used.

The DOH also warned that the daily detected COVID-19 cases would go up in the coming days.

Of the 215 more people who died from the disease, 120 were previously tagged as recovered.

While there were 125,900 individuals still infected with the virus, the majority or 93.8 percent of the active cases were mild; 3.4 percent, asymptomatic; 0.94 percent, moderate; 1.2 percent, severe, and 0.6 percent, critical.

Meanwhile, one out of four or 25.5 percent of the 65,583 people who were tested for COVID-19 last Aug. 20 were confirmed infected with the virus.

The test results did not yet include those from six laboratories that failed to report to the DOH.

A positive development during the two-week lockdown was the slowdown in the COVID-19 surge in the National Capital Region (NCR), an indication that the two-week enhanced community quarantine (ECQ) was effective, an independent pandemic monitor claimed.

However, OCTA Research said that efforts to contain the virus spread must be sustained over the next month, or the benefits of the hard lockdown would just go to waste.

In its Aug. 22 monitoring of the new cases in Metro Manila, OCTA said the current reproduction number was at 1.67, a decrease from 1.9 a week before. This is the number of people an infected person can pass on the virus to and is based on the weekly case average of NCR from Aug 15 to 21 and the prior week, Aug. 8 to 14. The ECQ started on Aug. 6.

“The lockdown in the form of the [ECQ] helped reduce the growth rate of new COVID-19 cases,” it said.

OCTA cited two possible explanations for this — one was the presence of the more infectious Delta variant and second, the increased mobility of people during the recent ECQ.

“In any case, the downward trend in new cases may happen in the next few weeks, but this will require sustained efforts in pandemic management over the next four weeks by the local and national governments and the public,” it said.