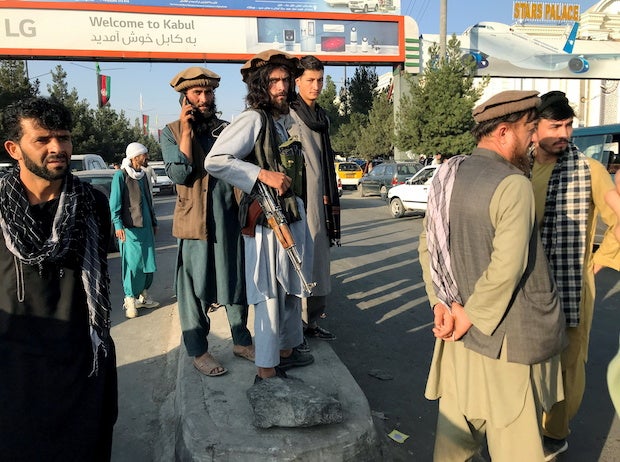 KABUL — The Taliban fired in the air and used batons to force people desperate to flee Afghanistan to form orderly queues outside Kabul airport on Sunday, witnesses said, a day after seven people were killed in a crush at the gates.

On Sunday, there were no major injuries as gunmen beat back the crowds and long lines of people formed, the witnesses said, and Washington said it was now able to get large numbers of Americans into the airport.

Britain’s defense ministry said seven Afghans were killed in the crush around the airport on Saturday as thousands tried to get a flight out, a week after the Islamist militants took control of the country.

Sky News showed soldiers on a wall on Saturday attempting to pull the injured from the crush and spraying people with a hose to prevent them from getting dehydrated.

“Conditions on the ground remain extremely challenging but we are doing everything we can to manage the situation as safely and securely as possible,” the ministry said.

A NATO official said at least 20 people have died in the past seven days in and around the airport. Some were shot and others died in stampedes, witnesses have said.

British Prime Minister Boris Johnson called a meeting of leaders of the Group of Seven wealthy nations on Tuesday to “ensure safe evacuations, prevent a humanitarian crisis and support the Afghan people”.

Panicked Afghans have tried to board flights out, fearing reprisals and a return to a harsh version of Islamic law the Sunni Muslim group exercised while in power two decades ago.

Leaders of the Taliban, who have sought to show a more moderate face since capturing Kabul last Sunday, have begun talks on forming a government.

The United States and other foreign countries including Britain have brought in several thousand troops to help evacuate foreign citizens and vulnerable Afghans, but have been careful to avoid clashes with the Taliban.

“Managing chaos outside Kabul airport is a complex task,” the official, who spoke on the condition of anonymity, told Reuters.

Afghans who fled this week have spoken about their despair at leaving loved ones behind and the uncertain future ahead. “It was very difficult to leave my country,” a veiled woman told Reuters in Qatar. “I love my country.”

The World Health Organization and U.N. children’s agency UNICEF called for a humanitarian air bridge to deliver aid to Afghanistan to help more than 18 million people in need.

Thousands of US troops

On Saturday, the United States and Germany told their citizens in Afghanistan to avoid traveling to Kabul airport, citing security risks as desperate crowds gathered, but Washington said on Sunday the situation had improved.

The United States has “secured the capacity to get large numbers of Americans safe passage through the airport and onto the airfield”, White House national security adviser Jake Sullivan told CNN’s “State of the Union.”

Army Major General William Taylor said on Saturday that 5,800 US troops remain at the airport, which “remains secure”.

On Sunday, a Pentagon spokesman said the United States would deploy 18 commercial aircraft to transport people who have been flown out of Afghanistan.

Taylor said that in the past week the United States has evacuated 17,000 people, including 2,500 Americans, from Kabul.

President Vladimir Putin rejected the idea of sending evacuees to countries near Russia, saying he did not want “militants showing up here under cover of refugees”.

The Taliban’s seizure of power came as US-led forces were withdrawing after a 20-year war that President Joe Biden sought to conclude.

Biden, who has come under heavy criticism for the way the war has ended, was due to speak about Afghanistan at 4 p.m. EDT (2000 GMT), the White House said.

On Saturday, former President Donald Trump called it “the greatest foreign policy humiliation” in U.S. history, even though his own administration negotiated the withdrawal deal last year.

Forces holding out against the Taliban in northern Afghanistan said this weekend they have taken three districts close to the Panjshir valley where remnants of government forces and other militia groups have gathered.

Ahmad Massoud, son of one of the main leaders of Afghanistan’s anti-Soviet resistance in the 1980s, said he would not surrender areas under his control to the Taliban, al-Arabiya TV reported on Sunday.

Taliban leaders are meanwhile trying to hammer out a new government and the group’s co-founder, Mullah Baradar, has arrived in Kabul for talks.

Commanders of the group are set to meet former governors and bureaucrats in more than 20 of Afghanistan’s 34 provinces over the next few days to ensure their safety and seek cooperation, the Taliban official said.

The Taliban, who follow an ultra-hardline version of Islam, have said they want peace and will respect women’s’ rights within the framework of Islamic law.

When in power from 1996 to 2001, the Taliban stopped women from working or going out without an all-enveloping burqa and stopped girls from going to school.