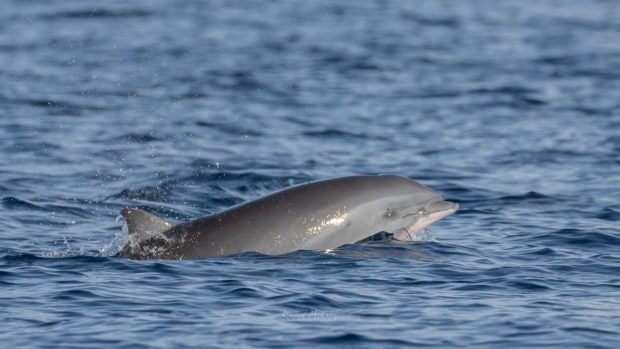 BAY ATTRACTION A Fraser’s dolphin is one of around 34 of the species seen frolicking in Puerto Princesa Bay in Palawan province on Saturday. —ROMMEL CRUZ/CONTRIBUTOR

PUERTO PRINCESA CITY, Palawan, Philippines — Over a dozen short-finned pilot whales (Globicephala macrorhynchus) and dozens more of Fraser’s dolphins (Lagenodelphis hosei) were sighted at Puerto Princesa Bay in Palawan province on Saturday, which were believed to have been encouraged to come to the bay due to the absence of human activities in the area amid restrictions in tourism activities due to the coronavirus pandemic.

Dr. Teri Aquino, a Palawan-based marine mammal specialist, said they sighted sometime past 8 a.m. about 18 pilot whales and 34 Fraser’s dolphins frolicking in the bay during their weekend trip organized by her group of hobbyists and environment enthusiasts.

Aquino said the short-finned pilot whales and other cetaceans were sighted at Puerto Princesa Bay in the past but this was the first time that they were seen in that number at one given time.

Whales and dolphins have been attracted to the bay because its water is rich in their “prey of choice, “ which is squid in the case of the pilot whales, added Aquino, who is affiliated with Marine Wildlife Watch of the Philippines.

Rommel Cruz, owner of tour company Wild Expeditions Palawan who joined Saturday’s expedition, said the coronavirus pandemic, which restricted travel and movement for many, had been a boon for marine life.

“[It] is a glimpse of the rich marine life of the city and how these creatures are benefiting from the current situation. Sometimes the new normal is not that bad at all for most wildlife,” he said.

According to the Department of Tourism, Puerto Princesa City entertained 1,170,083 guests in 2019.

By 2020, tourist arrivals went down to 71,889 as lockdowns were declared and tourist destinations were forced to close after the pandemic struck in March that year.

Previous surveys reported there were 11 species and subspecies of cetaceans in Puerto Princesa Bay, which were the centerpieces of dolphin-watching tours during the peak of travel season between March to July.

SPOTTED These short-finned pilot whales are among 18 seen in Puerto Princesa Bay on Saturday. Pilot whales, normally found in eastern Sulu Sea, head for the bay as tourist spots in Palawan remain quiet due to travel restrictions. —ROMMEL CRUZ/CONTRIBUTOR

The highest sightings of pilot whales in Puerto Princesa Bay occurred during the months of April and November.

But as early as April 2005, the marine survey team of the Environmentally Critical Areas Network zoning project reported that the number of pilot whales in the bay has decreased as the marine mammal prefers to stay in cooler waters.

Short-finned pilot whales are generally found in eastern Sulu Sea because of its cooler tropical waters, according to a 2006 report published in the Journal of Cetacean Research and Management. These species, which have black to dark gray or brown skin, are distinct compared to other cetaceans with its bulbous head and a broad sickle-shaped dorsal fin.

Pilot whales mature at around 10 years of age with a maximum lifespan of 45 years for males and 60 years for females.

Categorized as highly social animals, the pilot whales are often seen swimming and playing with other marine mammals in a usual pod of 15 to 30 close family relatives.

“You can ensure good interaction with cetaceans by knowing their behavior. For example, if they’re feeding, you need to keep your distance until they show signs of wanting to interact,” Aquino said.

She said the Departments of Tourism, Environment and Natural Resources, Agriculture, and Interior and Local Government have previously issued a joint memorandum that prescribed the proper way of engaging with marine wildlife for tourism purposes.