U.S. East Coast buckles down ahead of Hurricane Henri’s arrival 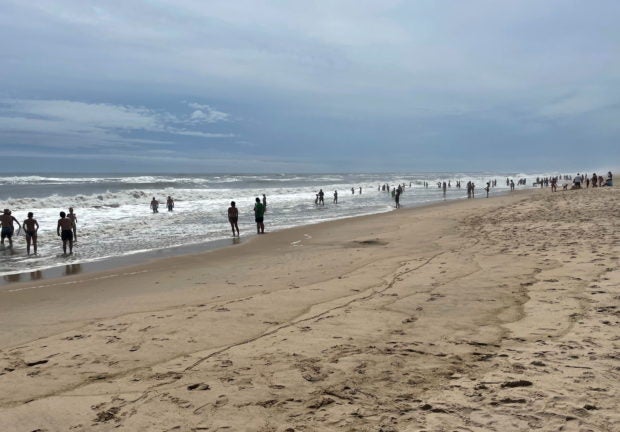 Residents and holiday makers in the Hamptons make the most of the calm before the storm at Atlantic Avenue beach ahead of Hurricane Henri’s landfall, Long Island, New York, U.S., August 21, 2021. (REUTERS/Leela de Kretser)

AMAGANSETT, N.Y.  – The U.S. East Coast braced on Saturday to take a direct hit from Hurricane Henri as it threatened to pound the region with fierce winds and heavy rains that could cause “life-threatening” storm surge and flooding, the National Hurricane Center (NHC) said.

As of Saturday afternoon, the storm was gathering strength, packing 75 mph (120 kph) winds while it moved north about 240 miles northeast of North Carolina. On its current track, Henri was expected to make landfall in Long Island, New York, or southern New England on Sunday, the center said in an advisory.

More than 42 million people in the region were under a hurricane or tropical storm warning on Saturday, the NHC said.

Parts of Long Island and New Haven, Connecticut, were under hurricane and storm surge warnings. Other parts of New England, such as Martha’s Vineyard and Nantucket, were under surge and tropical storm watches and warnings.

“This is a life-threatening situation. Persons located within these areas should take all necessary actions to protect life and property from rising water and the potential for other dangerous conditions,” the NHC said.

New York City, the largest city in the United States, was under a tropical storm warning. In a Twitter post, Mayor Bill de Blasio urged residents to stay home on Sunday and to use public transportation if they need to travel.

“Secure outdoor objects and make sure you are in a safe location before the onset of wind and rain!,” New York City Emergency Management Commissioner John Scrivani wrote in a tweet on Saturday.

At the IGA supermarket, shelves were stripped bare of toilet paper, paper towels and other supplies. Motorists waited in long lines at gas stations while stores ran out of flashlights.

Some of the most patient shoppers stood in a long line at the Balsam Farm Stand, which was packed with anxious shoppers filling bags with heirloom tomatoes, organic zucchinis, $9 free range eggs and hand-crafted mozzarella.

Michael Cinque, the owner of the Amagansett Wine & Spirit, deliberated whether to board up the windows of his store as shoppers streamed in and left with bottles of tequila, vodka and expensive liquors.

“You always have to be prepared,” said Cinque, who has owned the store for 42 years and also volunteers as an emergency responder. “You have to take it seriously.”

In his back storeroom, he shifted pink wine boxes to get near a wooden board that listed all of the hurricanes and “big ones” that the liquor store had weathered, going back to the New England hurricane of September 1938.

The last entry listed on Cinque’s board was 1985, when six hurricanes made landfall in the United States, tying with 1886 and 2020 for the record.

Cinque remembers the town being hit hard back then by a series of storms, one of which was even called Henri.

Asked if he thought this Henri could cause as much damage, he said he was preparing for the worst and hoping for the best.

“This is a low-lying area. It all depends on the timing. It’s a full moon and a high tide, so if it hits…” he said. “Roll up your pants.”

Officials on Fire Island off the south coast of Long Island told residents and visitors to leave or face the potential of getting stuck on the island.

In Newport, Rhode Island, a coastal yachting community of 25,000 people, sump pumps, flashlights and generators were also in high demand.

“They’re preparing from past experience,” Newport Hardware sales associate Hank Lopes told the Newport Daily News. “In low-lying areas like around here, people’s basements will flood even during a little rainstorm, not to mention what might be headed this way.”

Eversource, the largest electric utility company in Connecticut, warned residents to be prepared for power outages for up to five to 10 days.

“I do need to ask for patience,” Eversource President and CEO Joe Nolan said during a news conference on Friday, calling Henri a “very, very serious storm.”

Several airlines issued travel alerts and were offering vouchers for flights in and out of the region over the weekend. The Long Island Rail Road and Metro-North Railroad were suspending Sunday service while Boston’s public transportation system said it was reducing service for Sunday.