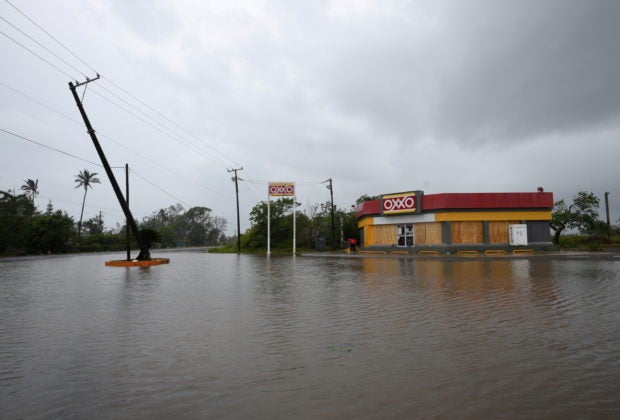 A road next to a convenience store is flooded after Hurricane Grace slammed into the coast with torrential rains, in Costa Esmeralda, near Tecolutla, Mexico August 21, 2021. (REUTERS/Yahir Ceballos)

TECOLUTLA, Mexico – Hurricane Grace pummeled Mexico with torrential rain on Saturday, causing severe flooding and mudslides that killed at least eight people after becoming one of the most powerful storms in years to hit the country’s Gulf coast.

Grace was blowing maximum sustained winds of 125 miles per hour (201 km per hour), a Category 3 hurricane on the five-step Saffir-Simpson scale, when it slammed into the coast near the resort of Tecolutla in Veracruz state in the early morning.

The state government said eight people were killed, including six from a single family. All but one of the victims died in Xalapa, the state capital, including a young girl killed by a mudslide that hit her home, the government said.

An adult was killed by a collapsed roof in the city of Poza Rica further north in the state, Veracruz Governor Cuitlahuac Garcia told a news conference.

“The state of emergency has not ended,” he added.

Local television showed severe flooding in Xalapa, with coffins from a local business floating down a waterlogged street. The nearby River Actopan burst its banks, shutting down a local highway, state authorities said.

Ericka Herrera, a homemaker in Tecolutla, was in tears as she described the destruction.

“Not of this magnitude that just wrecks everything,” she said. “It’s really sad. Things are really bad.”

Garcia said several rivers in Veracruz would flood, and urged the local population to take cover.

Television footage also showed flooding in Ciudad Madero in the southern reaches of the state of Tamaulipas near the border of Veracruz. Mexican state oil firm Petroleos Mexicanos’ (Pemex) Francisco Madero refinery is in Ciudad Madero.

Grace weakened quickly as it moved into the mountainous interior, and by 4 p.m. CDT (2100 GMT) it was dissipating in central Mexico, with top winds of 25 mph (35 kph). The center was about 65 miles (105 km) west-northwest of Mexico City, the Miami-based National Hurricane Center (NHC) said.

Before Grace hit land, President Andres Manuel Lopez Obrador urged people in the states of Veracruz, Puebla, San Luis Potosi, Tamaulipas and Hidalgo to get to higher ground or shelters.

Many appear to have heeded the call.

The NHC forecast Grace would dump 6 to 12 inches (15-30 cm) of rain over eastern and central Mexico through Sunday and up to 18 inches (45 cm) in some areas. The heavy rainfall will likely cause areas of flash and urban flooding, it said.

Veracruz and its waters are home to several oil installations, including Pemex’s port in Coatzacoalcos and its Lazaro Cardenas refinery in Minatitlan in the south. Grace hit land well to the north of these cities.

It also doused Jamaica and Haiti, still reeling from a 7.2 magnitude earthquake, with torrential rain.