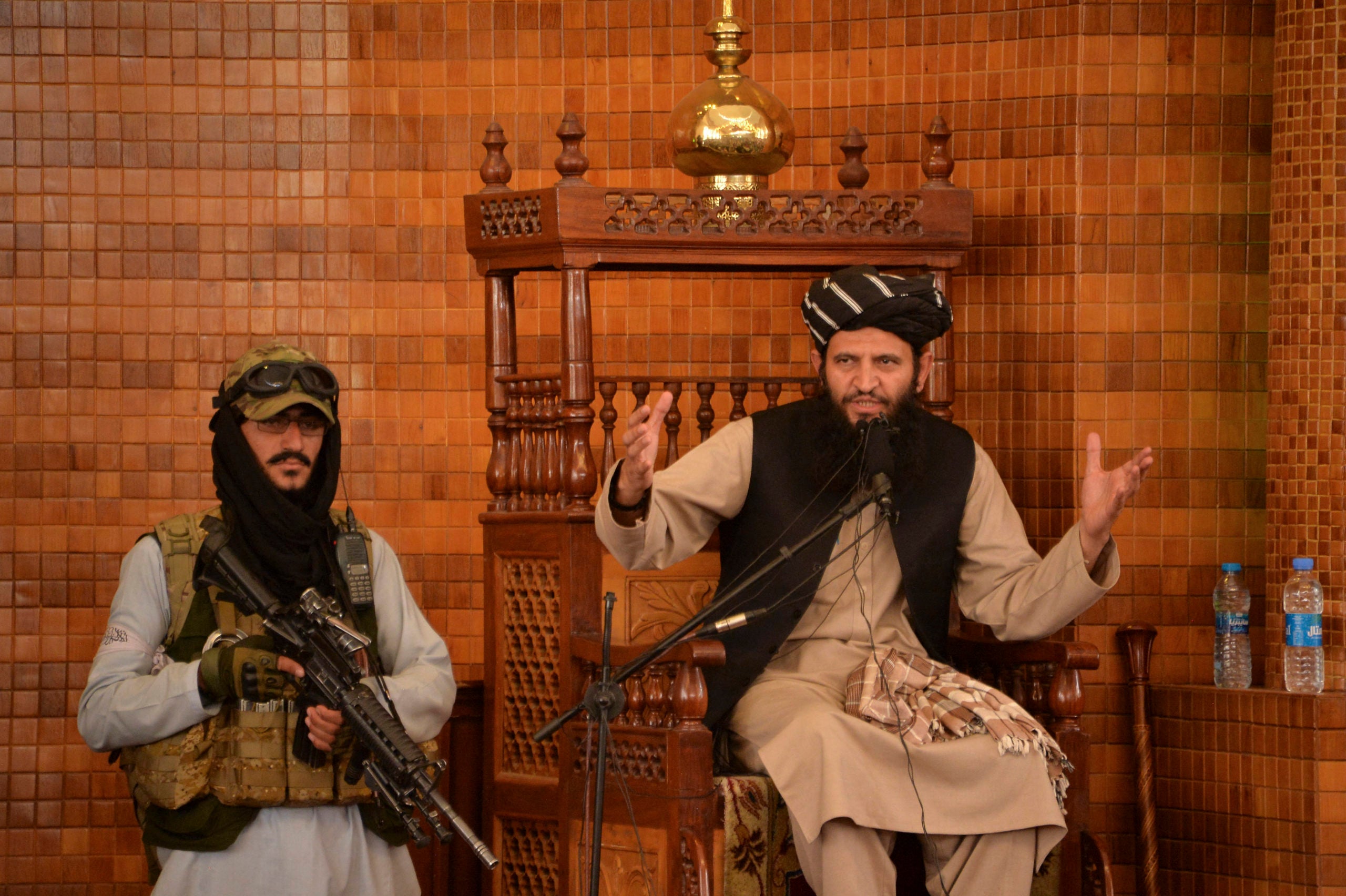 An Imam speaks next to an armed Taliban fighter during Friday prayers at the Abdul Rahman Mosque in Kabul on August 20, 2021, following the Taliban’s stunning takeover of Afghanistan. (Photo by Hoshang Hashimi / AFP)

KABUL, Afghanistan — The Taliban’s senior leadership was gathering in the Afghan capital Saturday to map out a future “inclusive” government, as desperation deepened for thousands still scrambling to leave the country via a chaotic evacuation operation.

A senior Taliban official told AFP that Mullah Abdul Ghani Baradar — who co-founded the group — would meet “jihadi leaders and politicians for an inclusive government set-up”.

Taliban officials said they included a top official of the Haqqani network, which has been designated a terrorist organization by the United States with million-dollar bounties on its leadership.

Six days after the hardline Islamist movement swept to power, the flow of people trying to flee continued to overwhelm the international community.

Roads leading to Kabul airport were choked with traffic, while families hoping for a miracle escape crowded between the barbed-wire surrounds of an unofficial no man’s land separating the Taliban from US troops and remnants of an Afghan special forces brigade helping them.

Video of a US soldier lifting a baby over a wall at Kabul’s airport offered the latest imagery of utter despair, following horror footage of people hanging onto the outside of departing planes.

“Please, please, please help me… where should I go, what should I do,” one man, who said he worked for the US embassy in the mid-2000s, wrote on a WhatsApp group set up for people to share information on how to get out.

“I have tried to get there (to the airport) for some days, but I cannot reach. Please save me.”

Thousands of US soldiers are at the airport trying to shepherd foreigners and Afghans onto flights, but President Joe Biden admitted the troop presence offered no guarantees of safe passage.

“This is one of the largest, most difficult airlifts in history,” Biden said in a televised address.

“I cannot promise what the final outcome will be, or… that it will be without risk of loss.”

US military helicopters were deployed to rescue more than 150 Americans unable to reach the airport on Friday morning, an official in Washington said.

It was the first report of US forces going beyond the airport to help people seeking evacuation.

A German civilian was also shot and wounded on his way to the airport, a government spokeswoman in Berlin said on Friday.

Biden had set a deadline of August 31 to completely withdraw all troops from Afghanistan, but he flagged this could be extended to continue the airlifts.

About 13,000 people have left on American military aircraft, the White House said. Thousands of others have fled on other foreign military flights.

The crisis has cast another shadow over the United States’ status as a global superpower and its ability to help allies around the world.

The Taliban swept into the capital last week, ending two decades of war after Biden pulled nearly all US troops out of Afghanistan.

Biden and other US allies were stunned at how quickly the Taliban were able to rout government forces, who surrendered en masse.

The Taliban have promised “positively different” rule from their 1996-2001 stint in power, which was infamous for an ultra-fundamentalist interpretation of Islamic law.

Women were excluded from public life, girls banned from school, and people stoned to death for adultery.

They have vowed not to seek revenge against their opponents, promising a general amnesty for anyone who worked with the US-backed government.

But an intelligence document for the United Nations said militants were going door-to-door hunting down former government officials and those who worked with US and NATO forces.

According to the confidential document by the UN’s threat assessment consultants seen by AFP, militants were also screening people on the way to Kabul airport.

The German public broadcaster Deutsche Welle reported that the Taliban had shot dead the relative of one of its journalists while searching for the editor.

At the first Friday prayers since the Taliban’s return to power, imams and guest speakers celebrated the defeat of the United States.

At one mosque in Kabul, gunmen flanked a scholar as he delivered a fiery speech in which he recounted how Afghans had beaten the British Empire, the Soviet Union, and now the United States on the battlefield.

“Afghans have once again shown collective pride,” he said.

At another mosque, the imam referenced the tragic scenes at the airport, describing those trying to flee as not having strong enough religious convictions.

“Those with weak faith are running after or hanging from American planes,” he said.

“They should stay and build their country.”