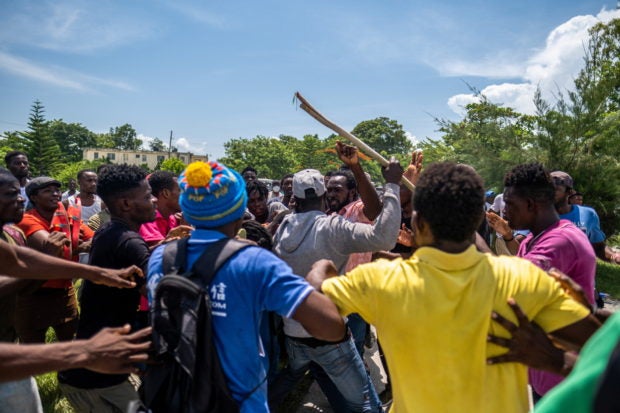 Followers of former Haitian President Michel Martelly fight over an envelope with a cash donation from a Martelly bodyguard during his departure outside the OFATMA hospital after Merely left, in Les Cayes, Haiti August 20, 2021. (REUTERS/Ricardo Arduengo)

MARCELINE, Haiti  –  Haitians desperate for food looted a humanitarian convoy on Friday and fought over donations as anger built over the slow pace of aid deliveries almost a week after a devastating earthquake killed more than 2,000 people.

Damaged or impassable roads have hindered efforts to deliver aid to remote parts in the south of the impoverished Caribbean nation, which were hardest-hit by last Saturday’s 7.2 magnitude earthquake. With hundreds still missing, hopes are fading of finding anyone still alive.

Aid organization Food for the Poor said that four of its trucks were attacked by local residents and looted on Friday as they delivered food and water to rural communities in the south.

Neither the drivers nor the trucks were harmed, the charity said, and five other trucks were able to reach their destinations safely.

“Food For The Poor remains committed to its mission of helping those affected by this terrible tragedy,” it said in a statement, adding that its staff were working hard to reach the most remote communities in need.

In the hard-hit city of Les Cayes, scuffles broke out after former President Michel Martelly visited a local hospital on Friday afternoon. A member of his staff gave an envelope filled with cash to one person in the crowd to be distributed amongst them, triggering a violent scramble for the money, a Reuters witness said.

Landslides and cracks in the tarmac on the mountain road between Les Cayes and Jeremie to its northwest – two of the worst-affected urban areas – made it harder to dispatch aid to farming communities short of food and drinkable water.

The route was littered with boulders and the occasional stranded truck.

“We are all absolutely overwhelmed,” Prime Minister Ariel Henry said in a meeting with the Organization of American States, saying some communities had been flattened. “Every commune, every city, every village in that area was very hard hit.”

The poorest country in the Americas, Haiti is still recovering from a 2010 quake that killed over 200,000 people.

It was pitched into deeper instability by the assassination on July 7 of President Jovenel Moise by what authorities say was a group of largely Colombian mercenaries.

Last Saturday’s quake destroyed tens of thousands of homes and claimed the lives of at least 2,189 people. Some 332 people are missing, while 12,200 people were injured, authorities said.

A powerful storm this week that triggered landslides made the search for victims even harder.

Many hospitals remained saturated in the worst-hit areas. At Les Cayes’ airport, helicopters ferried the injured to the capital, Port-au-Prince.

The kidnapping by gangs of two doctors in the capital, including one of the few trained orthopedic surgeons in Haiti, has added to the strain. Some hospitals shut down temporarily in protest, demanding the doctors be released, local media reported.

In the village of Marceline, 25 km (16 miles) north of Les Cayes, hundreds of people gathered to receive food and medical care at a mobile clinic and aid distribution effort organized by Haitian non-profit PWOP.

One of the patients was a girl who had debris embedded in a gash just below her knee, which cut down to the bone. She screamed in pain as the doctors cleaned and disinfected the wound without anesthesia.

Elsewhere in the village, some people dug graves to prepare for funerals, while other residents worked to remove a massive heap of rubble in efforts to find the remains of loved ones. The air smelled of decomposing bodies.

Amerlin Dorcy surveyed the rescue efforts. His mother Seralia Dejoit had been attending a voodoo ceremony in the house when the quake struck.

“She’s still missing. We don’t even have her body to bury,” said Dorcy, explaining that his mother had been called upon to sing at the ceremony by the head priestess.

The calamity brought back memories for Dorcy of the 2010 quake, which he survived by fleeing the collapsing three-story building he was inside in Port-au-Prince.

“Now there’s another earthquake and it’s my mother who’s the victim,” he said.