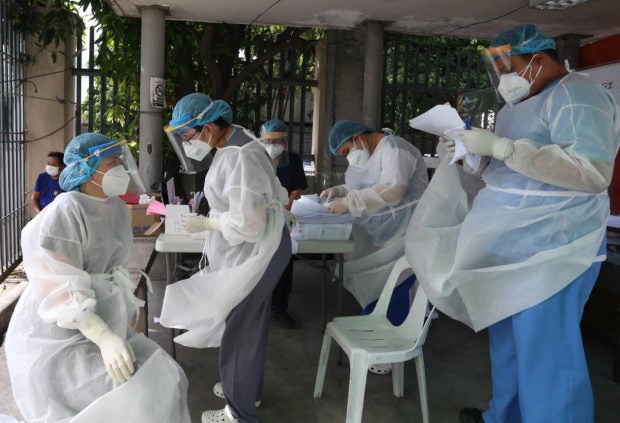 Hospital workers are scrambling to resubmit their records as proof of their service in COVID-19 wards and their corresponding eligibility to receive state benefits.

They are doing this despite the absence of a clear-cut plan of the Department of Health (DOH) as to where it would secure P2.6 billion to pay over 100,000 health workers deprived of their special risk allowance (SRA) because of bureaucratic lapses.

Robert Mendoza, president of the Alliance of Health Workers, said the DOH had not laid down a deadline, and that hospitals had only been told to submit the employee lists certified by hospital directors “ASAP”—as soon as possible.

At the Senate inquiry into the DOH’s questionable spending of P67-billion fund, health officials said that of the P9.7 billion SRA funds, only P7.13 billion was released to 379,117 health workers.

The DOH said this was primarily because it had very little time to obligate and disburse the amount before the Bayanihan 2 law expired last June 30.In a radio interview on Thursday, Health Undersecretary Leopoldo Vega said the DOH was able to release “80 percent to 90 percent” of the SRA funds to beneficiaries despite “the rush.”

“Still, some were left behind … In some hospitals, some who were not supposed to receive the SRA were able to get the money, while some who were eligible for it did not receive any,” Vega said in Filipino.

“It’s our shortcoming. We admit to it and we have to adjust to this kind of gap,” he said.

Vega did not say what would happen to those who received the SRA even when they were not qualified for it.

Vega said he and other DOH officials were in talks with health workers’ organizations “as to how we could remedy [the situation].”

He said they could find fund augmentation from the Department of Budget and Management, “or Congress can pass the Bayanihan 3 law [which specifies who are eligible for the SRA], so we’re clear.”

De Grano said the majority of public and private hospitals in Metro Manila were able to receive SRA funds for their workers.

But in other regions, most of the hospitals received only a partial amount, or none at all.

In some cases, the funds were “held” at the regional DOH offices in the absence of specific resolutions from local government councils, which are a requirement for the money to be released to the hospitals.

In Bulacan province, many hospitals were not even aware of the workers’ benefits and probably were not able to apply for the SRA, De Grano said.

The issue of delayed allowances and other benefits has elicited protests from health workers’ organizations and even calls for a mass resignation of nurses at the height of the pandemic.

“But at this time, we choose to call for unified and realistic action to open a dialogue between concerned agencies and hospital management, where the nurses’ voice is heard so that existing guidelines are turned into fair and just strategic actions,” they said, adding:

“We strongly urge decision-makers to give nurses their due benefits which they deserve, by adhering to standardized and consistent implementation of guidelines of compensation stipulated in the existing laws.”