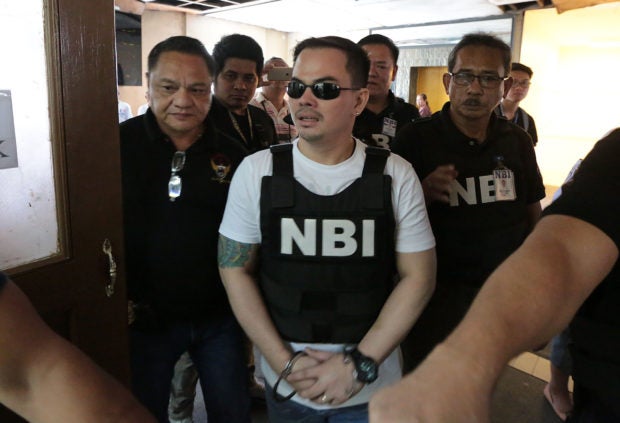 Self confessed drug distributor Kerwin Espinosa arrives at the Manila Regional Trial Court Branch 20 in Manila escorted by National Bureau of Investigation (NBI) agents on Thursday, August 30, 2018, to attend the hearing on the illegal drug cases filed by the Department of Justice against him. INQUIRER FILE PHOTO / GRIG C. MONTEGRANDE

The Department of Justice (DOJ) has indicted confessed drug trader Rolan “Kerwin” Espinosa, son of slain Leyte town mayor Rolando Espinosa, and several others for their alleged involvement in the illegal drug trade in Eastern Visayas.

In a resolution dated July 23 and approved by Prosecutor General Benedicto Malcontento, Espinosa and 10 others were recommended to be charged in court for alleged violations of Section 26(b), in relation Section 5, of Republic Act No. 9165, the Comprehensive Dangerous Drugs Act of 2002.

On the other hand, the DOJ prosecutors dismissed the complaint against 15 individuals, including several police officers, for lack of probable cause.

The resolution stemmed from the complaint filed by National Bureau Investigation, which conducted a probe on Espinosa’s alleged illegal drug trafficking activities.

“A reading of the affidavits of respondents Kerwin, Adorco, Antipuesto, Bobares, Rondina, Zaldivar, Diano, Estrera, Canin, Batistis, and Dumaguit, shows that the same contain statements wherein the affiants described their respective participation in the illegal drug trade of respondent Kerwin which partake in the nature of extrajudicial confessions, i.e. out of court confessions,” said the resolution made public on Thursday.

Citing the Rules of Court, the prosecutors said a confession is “the declaration of an accused acknowledging his guilt of the offense charged, or of any offense necessarily included therein may be given in evidence against him.”