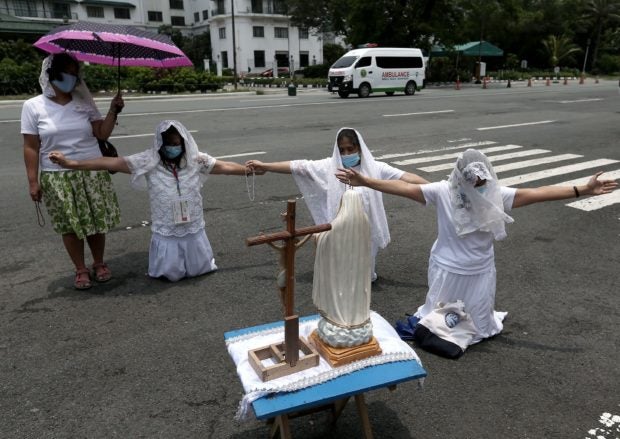 MISERERE NOBIS Three Catholic devotees pray on Thursday at Quirino Grandstand in Manila for an end to the pandemic.—RICHARD A. REYES

President Rodrigo Duterte approved the easing of the tight restrictions in Metro Manila and Laguna province and placed these areas under modified enhanced community quarantine (MECQ) from Aug. 21 to Aug. 31, Malacañang announced on Thursday night.

Bataan will also be under MECQ from Aug. 23 to Aug. 31, according to presidential spokesperson Harry Roque.

Mr. Duterte approved the recommendation of the Inter-Agency Task Force for the Management of Emerging Infectious Diseases (IATF).

They are also directed to improve their vaccination rates and their Prevent-Detect-Isolate-Treat-Reintegrate measures, and ensure compliance with minimum public health standards, he said.

Indoor and alfresco dine-in services and personal care services such as beauty salons, beauty parlors, barbershops and nail spas would still not be allowed to operate under MECQ. Religious gatherings could only be held virtually.

Metro Manila, Laguna and Bataan were placed under enhanced community quarantine, the strictest lockdown, earlier this month in a bid to contain coronavirus infections fueled by the Delta variant.

All establishments, persons or activities not permitted to work or operate during ECQ would be allowed to operate at 50 percent on-site capacity during the MECQ.

Earlier on Thursday, Interior Secretary Eduardo Año, a member of the IATF, said they were faced with the option to “either retain ECQ for another week or until the end of the month, or downgrad[e]…to MECQ so that other business[es] could open up.”

Metro Manila was under general community quarantine with heightened restrictions before the IATF imposed ECQ beginning on Aug. 6, upon the recommendation of the Octa Research Group amid the rise in cases of the more transmissible Delta variant.

“Our ICU utilization rate in Metro Manila has gone down. We are just at moderate risk at 61 [percent],” Roque said in a press briefing earlier on Thursday.

The ICU utilization rate has gone down in the last few days because the number of ICU beds was increased from 1,300 to 1,400, he said.

Roque said 58 percent of isolation beds, 69 percent of ward beds and 59 percent of ventilators in Metro Manila were in use as of Wednesday.

His figures showed use of ward beds was steady at around 67 percent on Monday; a slight decline in the use of isolation beds, from 62 percent; and an increase in the use of ventilators, from 53 percent.

Roque said the health-care utilization rate in Metro Manila was a key consideration in determining its quarantine status.