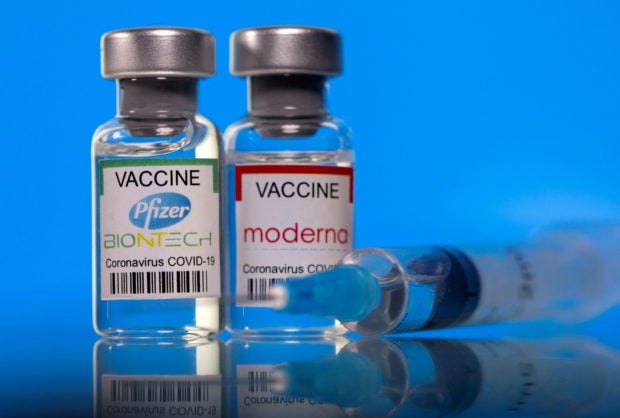 From the widely used Chinese Sinovac, the government’s inoculation drive would shift to Western-made vaccines such as Pfizer and Moderna for the rest of the year.

Secretary Carlito Galvez Jr., head of the National Task Force Against COVID-19 (NTF), said the delivery of the government-purchased Pfizer vaccines, which has so far come in trickles, was expected to pick up next month.

The government has bought 40 million Pfizer doses while only a “few more millions” of the 25 million Sinovac vaccines it acquired earlier have yet to be delivered at this point.

However, Galvez said at the arrival of more than 365,000 Pfizer vaccines on Wednesday evening that the Philippines was not shutting its doors to Chinese manufacturers.

In a Viber message, Health Undersecretary and National Vaccination Operations Center chief Myrna Cabotaje also said that the government was not shifting vaccine brands, but was only following the schedule based on the negotiation timetable between the government and the drug manufacturers.

Galvez also reacted to the recent Social Weather Stations (SWS) survey in which half of the 1,200 respondents found the vaccination rollout slow, saying it had to be put in proper context.

He pointed out that the poll was conducted on June 23-26 when the country had just about 9 million vaccines.

“We agree it was slow then because of the lack of vaccines. But if you will have a survey this August, (favorable responses) will significantly increase,” he said.

Secretary Vince Dizon, NTF deputy chief implementer, on Thursday said that more than 29 million people nationwide have already received at least a dose, adding that the number would reach 30 million by today.

Speaking at the press briefing of presidential spokesperson Harry Roque, Dizon said that from Aug. 1 to 18 alone, nine million doses were administered and the figure would reach 10 million today.

Despite the faster pace of inoculation, infections have remained high as the Department of Health (DOH) on Thursday said it recorded 14,895 new cases, bringing the country’s total to 1,791,003.

It was the second highest tally in a single day, just behind the 15,310 cases on April 2.

In its daily case bulletin, the DOH said there were now 111,720 active cases or currently sick individuals, although the majority or 95.3 percent were mild.

The DOH also said the positivity rate for the virus was 23.8 percent, which meant that of the 59,828 tested on Tuesday, one in five was positive for the virus.

According to the World Health Organization, the positivity rate of an area should be below 5 percent to indicate that the infection was under control.

The same bulletin said 72 percent of the country’s 4,100 beds in the intensive care unit were already in use, while 65 percent of around 14,000 COVID-19 ward beds were occupied.

The vaccines were scheduled to arrive in two batches in Manila today (Friday) and tomorrow.

The government is also exploring ways to ease the strain on the health-care system caused by the more infectious Delta variant.

Dizon said at the Palace briefing that local health workers were being deployed not only for vaccinations but also for testing and other pandemic response measures.

For areas under enhanced community quarantine, he said the NTF was meeting with the Commission on Higher Education on the possibility of deploying medical students as vaccinators, especially in places experiencing surges or a clustering of cases.

This way, the doctors and nurses in these areas could be redeployed to hospitals where they were much needed, he said.

He said local governments in Metro Manila that have achieved their vaccination targets would also be asked to help towns in the surrounding provinces of Rizal, Cavite and Laguna. —WITH REPORTS FROM PATRICIA DENISE M. CHIU and TINA G. SANTOS