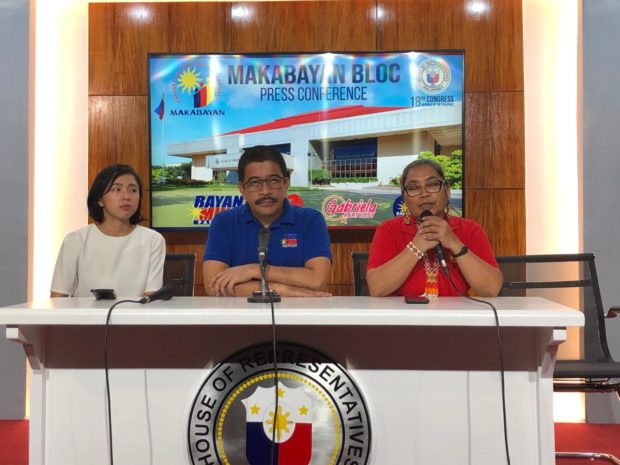 Makabayan bloc during a press briefing at the House of Representatives on October 9, 2019. INQUIRER.NET FILE PHOTO / NOY MORCOSO

MANILA, Philippines — The Makabayan bloc filed a resolution on Thursday seeking an investigation into the alleged irregularities identified by the Commission on Audit (COA) in the Department of Social Welfare and Development’s (DSWD) social amelioration program.

This developed after COA, in its annual audit report, reported several discrepancies in the DSWD SAP funds, one of which was DSWD tagging 135 out of the sample size of 6,761 identified beneficiaries as “paid” even though they have not received the second tranche benefits amounting to P920,000.

“Alleged questionable transactions and corrupt practices in the government should be investigated and punish the unscrupulous individuals that waste the people’s money for their selfish interests,” House Resolution 2146 read.

“Especially amid the worsening crisis aggravated by the COVID-19 pandemic, public resources should be used according to the needs and interest of the Filipino people in the most transparent and accountable way as possible,” it added.

Apart from this, House Resolution 2146 also sought an investigation on the alleged SAP anomalies based on Senator Manny Pacquiao’s allegation that questionable transactions attended the distribution of the DSWD cash aid.

“Among others, [Pacquiao] claimed that only 500,000 SAP-beneficiaries received the aid through Starpay, an e-wallet application contrary to the DSWD report that it completed its payout to 1.8 million beneficiaries. According to him, failure to download the online application deprived around 1.3 million beneficiaries the needed aid that they supposedly receive amid the COVID-19 pandemic,” the resolution stated.

Makabayan’s resolution also cited several quarters that questioned the contract entered into by the DSWD with Starpay, which allegedly only had P62,000 to facilitate the payout of SAP to 1.8 million Filipinos.

According to the resolution, DSWD reportedly channeled only 0.01% to 11.48% of the total SAP funds to five other FSPs which are more established, namely G-Xchange, Inc.; PayMaya Philippines, Inc.; Rizal Commercial Banking Corporation; Robinsons Bank Corporation; and Union Bank of the Philippines.

“COA further noted that this is due to poor implementation on the supplemental guideline of the memorandum of agreement between the DSWD and the FSPs. Upon verification with intended beneficiaries, (35) of them changed their cellphone numbers while the other 100 claimed that they have same cellphone numbers,” the resolution read.

“As it is now though with the latest ECQ supposedly to end tomorrow not even half of the SAP for this lockdown has been distributed to its beneficiaries,” said Bayan Muna Rep. Carlos Zarate