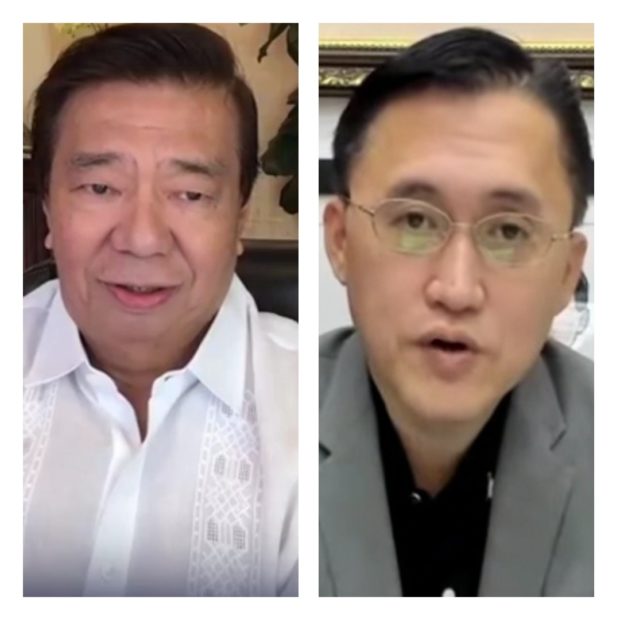 Senate Minority Leader Franklin Drilon wants Senator Bong Go present for hearings regarding the Department of Health (DOH) audit report because of his role as chair of the health committee. INQUIRER FILES

MANILA, Philippines — Senator Franklin Drilon thinks that Senator Bong Go should be present at the hearings regarding the Department of Health (DOH) audit report since his role as health committee chair would be helpful.

A TV host asked the senator on Thursday whether Go should appear at the Senate blue ribbon committee hearing, which has grilled officials of the Department of Health (DOH) and the Department of Budget and Management (DBM) on how COVID-19 funds were spent.

“Yes, he should be present and should assist us in clarifying this issue because Sen. Bong Go has familiarity with the health sector being the chair of our health committee and therefore he should help us,” Drilon said.

“Whether or not a senator would attend is a matter that is addressed to our discretion individually,” he added.

However, Go maintained that he was present during the committee hearing on Wednesday, during which cabinet officials were asked about DBM’s Procurement Service (PS-DBM) purchasing overpriced face masks and safety shields for DOH.

He said he was listening intently to the discussions and preparing for his questions, adding that he supports his colleagues in conducting the probe so that the truth will come out.

“I was there virtually and I was even recognized by the committee chair for having been present during yesterday’s hearing. I listened intently to the discussions as I prepared my queries and manifestations when my turn comes to speak in the next hearing,”

According to the order released by the Senate, Go was supposedly sixth among those who would make questions. However, other lawmakers listed below him like Senators Francis Pangilinan, Sonny Angara, and Pia Cayetano were able to raise their questions in the hearing because Blue ribbon committee chair Senator Richard Gordon has allowed senators to ask questions at any point during the hearing if they are about related topics.

“As a Senator and chair of the Senate Health Committee, I support the efforts to probe how public funds were spent in our country’s COVID-19 response. And I will definitely participate and support my fellow lawmakers in this endeavor,” he added.

Go said that there is really a need to look deeper into the observations made by COA on DOH’s expenditures to ensure that funds for the pandemic response would not be put to waste.

COA’s audit report of DOH for 2020 showed that P67.32 billion of the COVID-19 funds contained deficiencies caused by non-compliance with pertinent laws and regulations. This supposedly resulted in missed opportunities for the department primarily tasked with managing the pandemic.

These issues, COA said, also cast doubt on the regularity of transactions.

Canda said the executive committee of the DBM asked Lao, who has resigned from his post, whether the amount of money would even be defensible as the private sector thinks that the prices are way too high.

In contrast, committee chairperson Senator Richard Gordon — who also chairs the Philippine National Red Cross — revealed that they purchased face masks worth P5 per piece and face shields at around P15 per piece when PS-DBM made their procurements.

Go also countered assertions that Lao used to work for him, saying he was never his aide.

“I wish to clarify that contrary to claims of some personalities and news outlets, former USec. Lloyd Christopher Lao of the DBM Procurement Services was never my aide. To call him such is inaccurate,” Go said.

Before the hearing, former senator Antonio Trillanes IV — a staunch critic of Go and the administration — claimed that Lao used to be Go’s aide when he was still a special assistant to the president.

“He was a volunteer election lawyer of President Duterte in 2016 and was appointed to the Presidential Management Staff at the start of the term until early 2017. After which, he was appointed to HLURB and later to the DBM in 2019 before resigning last June of this year. Lao did not directly report to me, nor did he ever serve as my aide,” he added.