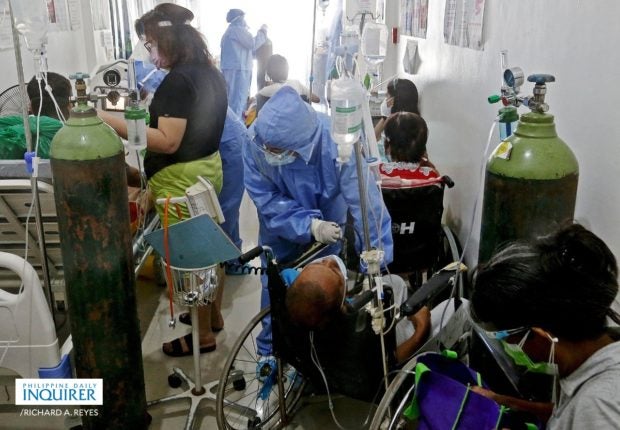 Senate Majority Leader Juan Miguel “Migs” Zubiri floated this idea as he noted conflicting claims by the DOH and health workers during Wednesday’s hearing of the Senate blue ribbon committee.

Health officials said the SRA had already been released to beneficiaries but health workers present during the hearing claimed otherwise.

(If they can’t do it, maybe it’s better if we give to DOLE [the SRA] of the nurses)

Zubiri then shared his earlier conversation with Labor Secretary Silvestre Bello III where he raised the possibility of transferring the fund to DOLE, noting its experience in downloading the cash aid to over a million of workers.

“Last week, we gave over a million families ayuda in NCR (National Capital region) and that was done in one week. And we’re talking about only tens of thousands of health workers, bakit hindi pa nila naibibigay?” he said.

As of June this year, P9.02 billion was already released to the DOH to pay for the SRA of public  and private health workers — each is entitled to receive not more than P5,000 a month from December 2020 to June.

Zubiri further noted the P5,000 allowance was a  “simple token” to health workers who have been at the forefront in the fight  against the COVID-19 pandemic.

Aside from the SRA, however, health workers who  got COVID or were killed by the virus,  have not also been receiving their compensation provided for under the law, the senator also pointed out.

“So the buck has to stop somewhere,”  Zubiri said, “I mean, where does the buck stop? In other words, who would take responsibility for the non-action of these particular issues, and the correction of these issues?”