Finding the one: Japanese forgoing marriage amid pandemic uncertainty 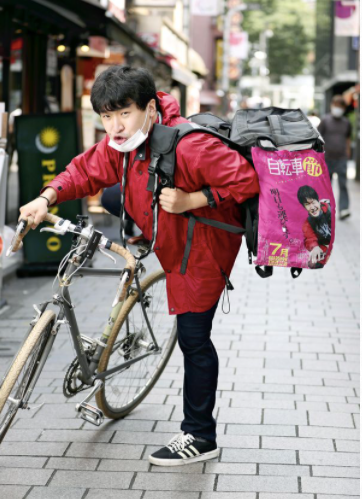 TOKYO — The number of marriages in Japan in 2020 plummeted to its lowest level since the end of World War II.

According to a demographic survey released by the Health, Labor and Welfare Ministry in June, there were 525,490 marriages in 2020, down 12% from the previous year. There were about 600,000 marriages in 2019, the first year of the Reiwa era.

The decline has been partly attributed to job losses and stay-at-home requests amid the coronavirus pandemic, which have resulted in people missing out on opportunities to socialize. This is the first installment in the series featuring singles struggling to find their future spouses.

Aspiring filmmaker Taku Aoyagi, 28, has produced a film documenting the plight of young people amid the pandemic. A poster advertising the documentary is attached to the delivery bag he carries during shifts as an Uber Eats deliverer.

The documentary records Aoyagi’s life as he works desperately to make ends meet.

He had produced videos in his hometown in Yamanashi Prefecture while doing farming and chauffeuring work. However, after losing his chauffeuring job last spring, he moved to Tokyo, where he has been working as a food deliverer while promoting his movie. He earns less than ¥100,000 a month.

He said he wants to get married and have a child someday, but first, he wants to pay back his student loan, which is about ¥5.5 million.

“The debt will disappoint my future spouse. Paying off the debt before marriage is my burden to bear,” he said.

According to a labor force survey conducted by the Internal Affairs and Communications Ministry, the number of regular employees in fiscal 2020 increased by 330,000 from the previous year. Meanwhile, the number of nonregular workers declined by 970,000, mainly because job cuts due to the pandemic occurred in sectors with many nonregular workers, such as restaurants and retailers.

“Many people are not getting married because they are worried about their economic future,” said Takanori Fujita, the director of the nonprofit organization Hot Plus, which supports people who are experiencing financial difficulties. “Nonregular workers in their 20s and 30s will face more difficulties if they have to pay back their student loans.”

A 37-year-old woman in Kanagawa Prefecture who lost her job last spring due to the pandemic said she worked freelance for a while but her income was less than half of what she had been earning, and she also ended up spending most of her time at home alone.

“When I met someone for the first time in a long time, I was shocked by how challenging it was to use my voice again,” she said.

She started a temp position this spring and said the return of a regular income raised her spirits and gave her the courage to join a matchmaking agency.

“If I was jobless in my late 30s, I would feel sorry for my future spouse,” she said, adding that she thought she should make a move soon as she may want a child in the future.

“The young population has been declining and the number of marriages has also been on a downward trend,” said sociology Prof. Masahiro Yamada of Chuo University. “Amid such a situation, anxieties regarding infection prevention and economic concerns are also having an impact. Although the figure might recover, the downward trend will continue.”

Until around the 1980s, people had expectations that marriage would help to increase their living standards.

However, given the increasing number of nonregular workers, nowadays people are more likely to be worried about failing to maintain their living standards even after marriage.

According to Yamada, priorities regarding such things as marriage are changing and people are less interested in dating. Such factors may be the reason people are more reluctant to get married.

“To rearouse the desire for marriage, it will be necessary to correct the disparity between regular and nonregular workers and guarantee a certain level of living standards for people in all occupations,” Yamada said.