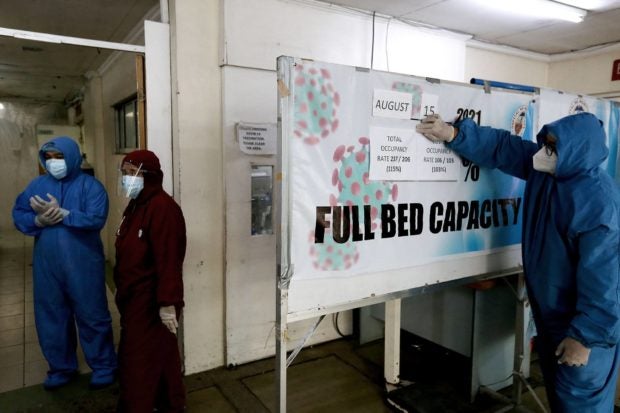 EXTRA HOURS A health worker updates the bulletin at the emergency room of Ospital ng Muntinlupa in Muntinlupa City as it exceeds its bed capacity on Sunday. Doctors, nurses and other medical front-liners work extra hours amid a surge in COVID-19 cases in the country. —RICHARD A. REYES

MANILA, Philippines — Low salary and sheer physical exhaustion from a prolonged pandemic have pushed a big number of nurses to give up and leave hospitals, straining further a health-care system that many feared could soon be on the brink of collapse.

The Department of Health (DOH) has already appealed against the mass resignation of nurses, which comprised 70 percent of a hospital’s manpower.

However, Benjie Foscablo, secretary of the nurses’ union at St. Luke’s Medical Center in Taguig City, said there was no deliberate call for a mass resignation and they were, in fact, encouraging their colleagues to stay on.

Admitting that he, too, was sometimes tempted to quit his job of seven years, Foscablo, 29, said they could only hold the ground for so long, unless policymakers crafted a law that would mandate an increase in nurses’ pay in private facilities.

Unlike nurses in public hospitals who benefit from the salary standardization law and get a higher entry rate, nurses in private facilities were minimum wage earners getting P537 a day.

“Actually, [the mass resignation] has been going on for the past two weeks already. About 40 percent of nurses (across the country) had resigned,” Foscablo said, quoting data from the Private Hospitals Association of the Philippines Inc.

“As much as we wanted to encourage [the nurses to stay] because it’s the patients who would [ultimately] suffer, we sympathize with them. How could you stop them [from leaving], when you don’t value them,” Reyes said.

At St. Luke’s, which employs about 1,000 nurses, Foscablo said many of those who had resigned moved to business process outsourcing companies or as company nurses, where “you earn more and without being on the (hospital) bedside.”

Alliance of Health Workers president Robert Mendoza said they were still collating data from different unions but said “20 to 30” nurses had resigned from the Jose Reyes Memorial Medical Center, a COVID-19 treatment facility, from January alone.

“Most of them left the country [to work abroad],” Mendoza said.

Jossel Ebesate, All-UP Workers Union president and former nurses’ union president at the Philippine General Hospital (PGH), said the mass resignation in private hospitals began last year, with several of them moving to PGH because of the higher pay.

Foscablo said they were in talks with unions in 10 other private hospitals in Metro Manila to come up with a unified demand and solution to their grievances.

“There are more nurses leaving and very few are hired to replace them. Yet, patients keep coming in,” he said in a phone interview on Monday.

As a result, he said, nurses were stretched to work 14 to 16 hours, longer than the 12-hour shift, and were often called in during their days off.

Part of their problem was the failure of the government to release financial assistance earmarked for health-care workers during the pandemic.

However, the DOH said it had “resolved” some issues and was working on the others raised by the Commission on Audit (COA) on the department’s use of funds for the pandemic response last year. The COA said the DOH’s P11.8-billion allotment from the Bayanihan 1 and 2 laws and foreign loans were unobligated as of end last year.

Health Undersecretary Leopoldo Vega said the DOH had already used P4.2 billion out of the P5.1 billion Bayanihan 2 funds as of June this year. For the rest of the funds, including P4.7 billion in projects from foreign loans, the DOH has requested for the “reissue of Saro” or special allotment release order for this year, he said.

“This did not go to waste. Those procurement and other COVID-related activities, which were not accomplished last year due to varying factors, were done in the first semester of the current year,” Vega said in a media briefing on Monday.

On the P4.8 million in unpaid financial assistance to health-care workers, Vega said the issue had been resolved since the amount had been paid by the DOH regional offices.

He said the DOH had also resolved the P275 million in meal allowances for health-care workers that were distributed in the form of cash allowances, gift certificates and grocery items, saying the Office of the President approved the scheme of giving “cash equivalents.”

The DOH has also addressed the failure to submit the summary or list of donations worth P1.4 billion, Vega said.

He noted though that the DOH had only “partially resolved” the procedural and documentary deficiencies in fund transfers for the procurement of personal protective equipment and other COVID-19 supplies worth P42.4 billion as well as in various contracts worth P5 billion.

He said concerned units were still completing documents to address the other issues raised by the COA, such as the lapses in the grant of various COVID-19 allowances worth P814 million, the handling of P98 million in cash advances and petty cash, and incomplete supporting documents for P11.6 million worth of death and sickness compensation.