No decision yet on new Metro Manila quarantine status 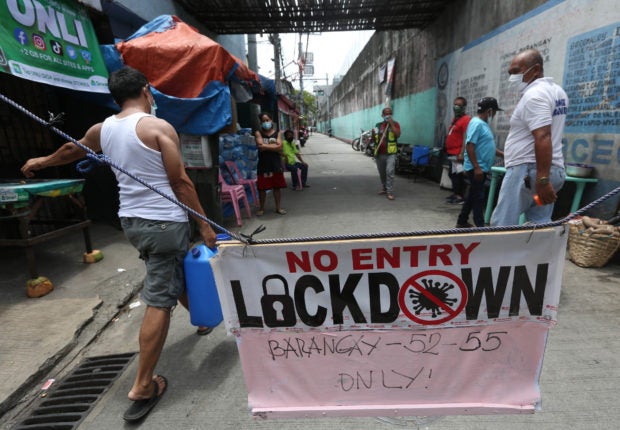 (File photo) PRECAUTION Barriers have been set up in several villages in Pasay City to prohibit nonresidents from going in and out of these communities as Metro Manila undergoes another round of lockdown to contain the spread of COVID-19. —MARIANNE BERMUDEZ

In a press briefing on Monday, presidential spokesperson Harry Roque said the Inter-Agency Task Force for the Management of Emerging Infectious Diseases (IATF) would meet on Tuesday to discuss the matter, release its recommendations the next day and, pending appeals from local governments, finalize its decision on Thursday.

Metro Manila is under ECQ, the strictest level of quarantine classification, until Aug. 20

Asked if a change in status was likely, Roque replied, “Our objective is total health: lower the number of cases but there shouldn’t be an increase in the ranks of the hungry. So we will see the data, there are a few days more [to go under the ECQ period].”

Dr. Alethea de Guzman, director of the Department of Health’s Epidemiology Bureau and head of the COVID-19 Surveillance and Quick Action Unit, who was also at the briefing said that PDITR (prevention-detection-isolation-treatment-reintegration) strategies and mass vaccination must continue to lessen the burden of the health-care system.

As part of government efforts to ramp up testing, the Department of Science and Technology (DOST) has tapped Elpidio Cesar Nadala Jr., a Balik Scientist and cofounder of the Diagnostics for the Real World in Cambridge, United Kingdom.

The veteran virologist said during the DOST’s Balik Scientist courtesy call last Friday that not enough testing was being done here because the country had to buy ready-made kits for RT-PCR tests that were expensive.

Along with his wife Lourdes, Nadala was part of the team that created the SAMBA II SARS CoV-2 test kit in Cambridge University—a fully automated system that conducts sample preparation, extraction, amplification and detection of the presence of the novel coronavirus in less than 90 minutes.

According to the University of Cambridge website, the diagnostic kit can provide the results “while the patient waits, helping health-care workers ensure that those infected can be quickly directed to specialized wards.”

“When they have people coming to the emergency room and they want to know the status, they can test [right away]. That’s the kind of test we need over there and not the test that you will find out two days later. What will the hospitals do? People will be staying outside lining up in the emergency room,” Nadala said.

He added that the enzymes used in different tests, such as antibody-based, antigen or nucleic acid, could be made locally and made available at affordable prices.