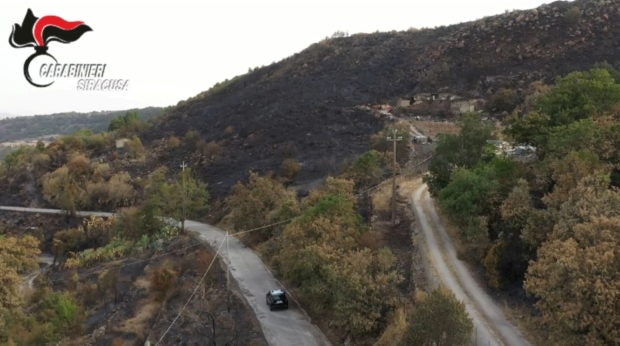 Carabinieri military police vehicle is seen during a investigation that led to the arrest of two suspected arsonists in Buccheri, Italy August 14, 2021 in a video screengrab. Siracusa Carabinieri/Handout via REUTERS

ROME — Italian police arrested two farmers in Sicily on Saturday on suspicion of lighting recent wildfires to create grazing land for their sheep, and said the two had been planning another large and dangerous blaze.

Wildfires have torn through swathes of southern Italy this summer, helped by record high temperatures, ravaging woodland in Calabria and on the islands of Sicily and Sardinia.

Police in Syracuse, south-east Sicily, a region where temperatures hit almost 49 Celsius (120.2 Fahrenheit) on Wednesday, said their investigations showed the men were responsible for at least two of a series of fires in the area in July.

“Their goal was to increase the grazing area of their animals with the declared intention of saving money on forage,” police said in a statement.

Ecological Transition Minister Roberto Cingolani has said at least 70% of the wildfires this summer have been started deliberately or through carelessness. Police last week caught a man on video lighting dry shrub in the countryside near Naples.

Authorities cite various motives for arson involving wildfires, from clearing land for grazing or construction, to insurance claims and even creating overtime work for firefighters.

The police said their recordings of the two men’s conversations showed they planned a new fire on Sunday to clear a much larger area of land “with unimaginable consequences for the environment and public order and safety”.