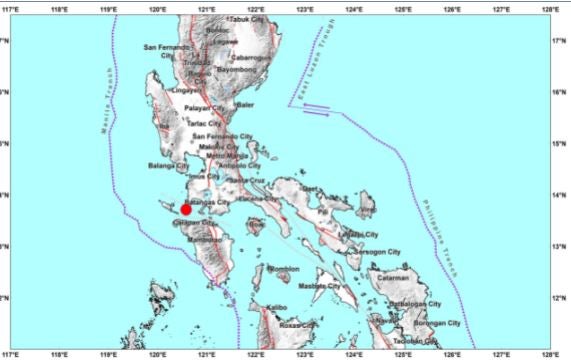 MANILA, Philippines — A magnitude 5.7 quake hit the town of Calatagan in Batangas late Friday night, with tremors felt as far as Bulacan according to the Philippine Institute of Volcanology and Seismology (Phivolcs).

According to Phivolcs’ bulletin, the tectonic earthquake occurred around 11:08 p.m., with an epicenter found 15 kilometers southwest of Calatagan.

Despite the epicenter being deep into the ground, at a depth of 113 kilometers, Intensity IV was still felt in Puerto Galera and Oriental Mindoro.

Intensity III meanwhile was experienced in Pasig City, Quezon City, and in Obando town of Bulacan.

Phivolcs said that no damage is expected as of now.  Also, no aftershocks are seen to follow this movement.

As of now, Phivolcs has not yet released any tsunami warning regarding the earthquake, considering that the town sits near the waters between Batangas and Mindoro island.

According to the state seismology bureau, this recent earthquake is actually one of the strong aftershocks of the magnitude 6.6 earthquake that hit the same area early morning of July 24.

Earlier, several residents in Metro Manila and nearby provinces shared on social media that a strong earthquake was felt in their areas.

The earthquake was felt by some residents in Metro Manila and nearby provinces as social media was flooded with tweets about the earthquake.

Several netizens from Makati and southern areas of Metro Manila, up to Laguna reported the tremor around 11:10 p.m.